To Venus And Back (studio album) by Tori Amos 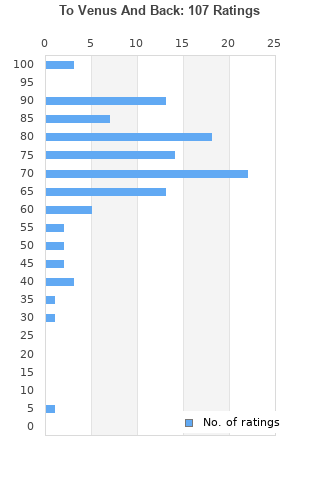 To Venus And Back is ranked 6th best out of 24 albums by Tori Amos on BestEverAlbums.com.

The best album by Tori Amos is Little Earthquakes which is ranked number 600 in the list of all-time albums with a total rank score of 3,079. 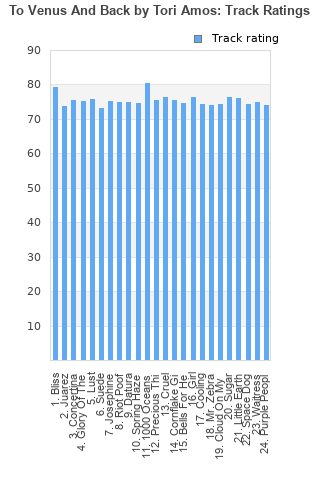 To Venus And Back rankings

To Venus And Back collection

To Venus And Back ratings

Rating metrics: Outliers can be removed when calculating a mean average to dampen the effects of ratings outside the normal distribution. This figure is provided as the trimmed mean. A high standard deviation can be legitimate, but can sometimes indicate 'gaming' is occurring. Consider a simplified example* of an item receiving ratings of 100, 50, & 0. The mean average rating would be 50. However, ratings of 55, 50 & 45 could also result in the same average. The second average might be more trusted because there is more consensus around a particular rating (a lower deviation).
(*In practice, some albums can have several thousand ratings)
This album has a Bayesian average rating of 72.8/100, a mean average of 72.2/100, and a trimmed mean (excluding outliers) of 72.8/100. The standard deviation for this album is 15.1.

To Venus And Back favourites

To Venus And Back comments

This is one of those albums that are half-studio and half-live. I'm pretty sure this has never been done right and it's not really done right here. The studio stuff is kind of boring, it's really the live disc that makes this worth a 40.

Meh, I don't know about that, BadFaith. I think that this album is where she started to go downhill. If it wasn't for the mind-blowing live disc that accompanies this, I'd probably give this a 60 or a 55.

The first half is the studio album of original material, the second, a live labum of olldies.
The first is as good as anything she's done, and stands with From the choirgirl hotel as a high point in her career.

Your feedback for To Venus And Back