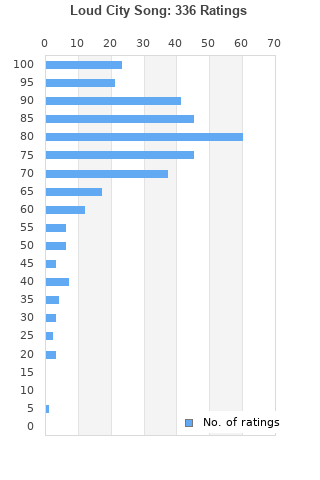 JULIA HOLTER ~ LOUD CITY SONG ~ CD 2013 ~ EX/EX
Condition: Very Good
Time left: 1d 7h 50m 24s
Ships to: Worldwide
$6.00
Go to store
Product prices and availability are accurate as of the date indicated and are subject to change. Any price and availability information displayed on the linked website at the time of purchase will apply to the purchase of this product.  See full search results on eBay

Loud City Song is ranked 2nd best out of 7 albums by Julia Holter on BestEverAlbums.com.

The best album by Julia Holter is Have You In My Wilderness which is ranked number 595 in the list of all-time albums with a total rank score of 3,259.

Tickets from Ticketmaster Get tickets
May
23
Sun
19:30 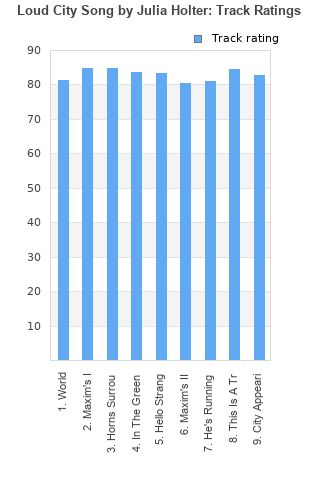 Rating metrics: Outliers can be removed when calculating a mean average to dampen the effects of ratings outside the normal distribution. This figure is provided as the trimmed mean. A high standard deviation can be legitimate, but can sometimes indicate 'gaming' is occurring. Consider a simplified example* of an item receiving ratings of 100, 50, & 0. The mean average rating would be 50. However, ratings of 55, 50 & 45 could also result in the same average. The second average might be more trusted because there is more consensus around a particular rating (a lower deviation).
(*In practice, some albums can have several thousand ratings)
This album is rated in the top 3% of all albums on BestEverAlbums.com. This album has a Bayesian average rating of 78.1/100, a mean average of 77.4/100, and a trimmed mean (excluding outliers) of 78.3/100. The standard deviation for this album is 16.4.

this was actually quite pleasant, to be honest with you.

This is a magical journey into an other-worldly introspective polyphony.
Spooky at times. Simply gorgeous at other times.
Music from another planet.
As soon as I heard it, I had to hear it again ... with headphones.

I don't feel like this is very accessible, but wow is it atmospheric. Fair play to Julia Holter for making this sort of album. If I were to describe its feeling, it would be like walking home alone at nightime on a deserted street, visibility low and the knowing that someone or something is watching you. Maybe that's just me!

A more accessible record than her previous effort. Still, loud city song, is another special album from one of the most interesting artists of recent times. Lovely sounds and textures. A superb album.

A serene drive around the city of Berlin. Enjoying the sights as they come.

Singing in the rain!

Stunning! Modern jazz meets Laurie Anderson's quirky art pop.
Triumphant despite being surrounded by the echoes of sadness. Exultant & defiant yet still adorable & intimate. Merrily conjuring rainbows with each skip through the oil slicked puddles that would make others dreary. What do we say to death? Not today!

i'm in love with this album

very interesting, very dreamy, and kinda depressing, but it a good way

A great discover and a amazing beginning for someone who is not accustomed to listen to this genre, amazing arrangements great instrumentation. loved the three first songs and the album continued to unroll the following songs while some sketches came shaped in thoughts (Normally calm thoughts and shining ideas). argument about this album is a kind of hard for me, but let's say that it opened a big closet in my mind, and shined a light above my head.

Your feedback for Loud City Song