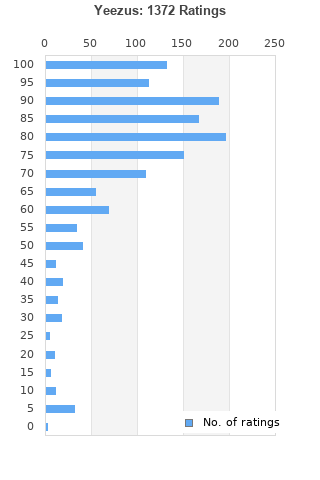 Yeezus is ranked 3rd best out of 12 albums by Kanye West on BestEverAlbums.com.

The best album by Kanye West is My Beautiful Dark Twisted Fantasy which is ranked number 33 in the list of all-time albums with a total rank score of 31,977. 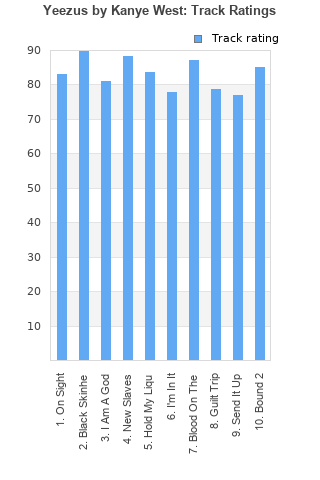 Rating metrics: Outliers can be removed when calculating a mean average to dampen the effects of ratings outside the normal distribution. This figure is provided as the trimmed mean. A high standard deviation can be legitimate, but can sometimes indicate 'gaming' is occurring. Consider a simplified example* of an item receiving ratings of 100, 50, & 0. The mean average rating would be 50. However, ratings of 55, 50 & 45 could also result in the same average. The second average might be more trusted because there is more consensus around a particular rating (a lower deviation).
(*In practice, some albums can have several thousand ratings)
This album is rated in the top 4% of all albums on BestEverAlbums.com. This album has a Bayesian average rating of 77.6/100, a mean average of 75.1/100, and a trimmed mean (excluding outliers) of 77.6/100. The standard deviation for this album is 21.3.

Probably my second favorite of Kanye's. Not all of the songs are perfect, but it has so much really dope stuff throughout. Black Skinhead, New Slaves, and Bound 2 are all highlights.

I expected it'd be better than Graduation, since it's more popular. I really like the cover art. Some synths doesn't sound fresh, timbres that didn't aged so well.

It's strange, loud and angry...
You might not like it at first, but over time, it'll grow on you.
I won't say it's his best album, but it's still pretty good!
The best song is Bound 2.

Not my favorite direction for Kanye, nor my favorite collection of tracks. But he's consistently more compelling and interesting than most.

Didn't like it in the past, turns out this is a very good album.

If there were no samples kanye will do nothing

An abrasive masterpiece of production.

It can be the perfect album, everything is in harmony here. Kanye is a true genius.

I liked MBDTF but Yeezus goes much much further as an album. It's like this verse,
You see, there's leaders and there's followers. But I'd rather be listening to Yeezus than MBDTF.

Your feedback for Yeezus