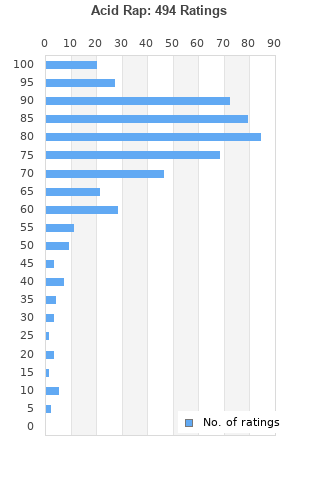 Acid Rap is ranked as the best album by Chance The Rapper. 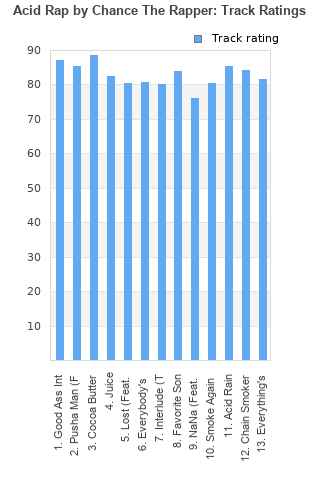 Rating metrics: Outliers can be removed when calculating a mean average to dampen the effects of ratings outside the normal distribution. This figure is provided as the trimmed mean. A high standard deviation can be legitimate, but can sometimes indicate 'gaming' is occurring. Consider a simplified example* of an item receiving ratings of 100, 50, & 0. The mean average rating would be 50. However, ratings of 55, 50 & 45 could also result in the same average. The second average might be more trusted because there is more consensus around a particular rating (a lower deviation).
(*In practice, some albums can have several thousand ratings)
This album is rated in the top 3% of all albums on BestEverAlbums.com. This album has a Bayesian average rating of 77.8/100, a mean average of 76.3/100, and a trimmed mean (excluding outliers) of 77.9/100. The standard deviation for this album is 16.7.

A very smooth and slick listen, in terms of production. It sounds so clean which makes it a very enjoyable and easy album to get into even if it is your first listen. There are some great songs on here as well, that sound really fresh and the artist really puts his stamp on the record. It is also extremely creative and experimental sonically and risks were definitely taken in the formation of this project. However, it does sound quite basic and simple at times and could do with some more aspects that will keep people entertained on multiple listens. A few tracks are a bit weak as well and the lyrics aren't incredible at times. Overall, a very fun album to listen too and if the artist built off this record then there is great potential.

Haven't listened to the record yet, but... Is it just me or it has 4 top rated tracks?

the vocals are annoying at some point !!!!

Acid rap ranges the spectrum of feelings from something beautiful like Everybody's Somebody to some stupid and fun like NaNa. It's one of the most fun albums I've ever heard and it's full of great tracks. Paranoia is one of the best rap tracks of the 2000s.

definitely his best work but he is not Kanye.. though he obviously aspires to be

Cool mixtape with good tracks. Chance has a nice voice and the production is good.

Phenomenal album, mixtape, piece of artwork... Fortunate enough to own this on vinyl!!

The first half of this mixtape is beyond solid, but after the That's Love Interlude, it takes a dip in quality for 3 tracks (Favourite song, Nana, Smoke Again), but then picks up the quality again when you reach Acid Rain until the end. Overall a very fun and original album/mixtape

Your feedback for Acid Rap