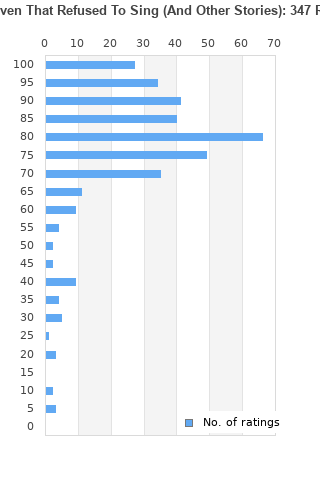 Steven Wilson - The Raven that Refused to Sing - Porcupine Tree - Import CD
Condition: Very Good
Time left: 1d 13h 51m 54s
Ships to: Worldwide
$7.99
Go to store
Product prices and availability are accurate as of the date indicated and are subject to change. Any price and availability information displayed on the linked website at the time of purchase will apply to the purchase of this product.  See full search results on eBay

The Raven That Refused To Sing (And Other Stories) is ranked 2nd best out of 12 albums by Steven Wilson on BestEverAlbums.com.

The best album by Steven Wilson is Hand. Cannot. Erase. which is ranked number 551 in the list of all-time albums with a total rank score of 3,529.

The Raven That Refused To Sing (And Other Stories) track list 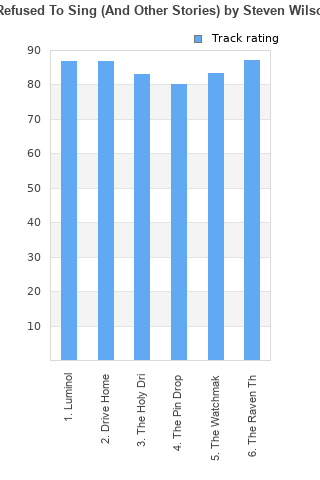 The Raven That Refused To Sing
Rating: 88 (88 votes)Comments:

The Raven That Refused To Sing (And Other Stories) rankings

The Raven That Refused To Sing (And Other Stories) collection

The Raven That Refused To Sing (And Other Stories) ratings

Rating metrics: Outliers can be removed when calculating a mean average to dampen the effects of ratings outside the normal distribution. This figure is provided as the trimmed mean. A high standard deviation can be legitimate, but can sometimes indicate 'gaming' is occurring. Consider a simplified example* of an item receiving ratings of 100, 50, & 0. The mean average rating would be 50. However, ratings of 55, 50 & 45 could also result in the same average. The second average might be more trusted because there is more consensus around a particular rating (a lower deviation).
(*In practice, some albums can have several thousand ratings)
This album is rated in the top 4% of all albums on BestEverAlbums.com. This album has a Bayesian average rating of 77.7/100, a mean average of 76.6/100, and a trimmed mean (excluding outliers) of 77.8/100. The standard deviation for this album is 18.9.

The Raven That Refused To Sing (And Other Stories) favourites

The Raven That Refused To Sing (And Other Stories) comments

Steven Wilson enter my list of the 10 best bands/artists of the 2010s decade, each album have a different taste and i love it, just an amazing musician

The Average Of the songs is 85!!!!!!! other albums are ranked among the best of all time with less than 85

A phenomenal homage to 70s prog rock with exceptional attention to detail.

Each song based on a ghost story.
Is it good? Yes, very.
Is it scary? No, not in the slightest!!

For anyone who follows my comments, you know I am a huge Steven Wilson fan. However, I just cannot get into this album. I love the title track and Drive Home and Luminol is fine, but the other 3 tracks...

To echo others, this is perhaps his most 70's prog-sounding work (that flute!) But Steven Wilson still makes it a sound all his own. And what a delightful sound it so often is!

Favoritas: The Raven That Refused to Sing, Drive Home, Luminol

Hahah, this album is literally on par with the greatest prog albums ever made and sounds so 70s I'm stunned. What an album!

I only started listening to Steven Wilson's music (Porcupine Tree's & Blackfield) 4 months ago after attending a King Crimson concert and seeing Gavin Harrison played which led me to discovering SW's music. I was immediately hooked on his work with The Porcupine Tree and picked up this record without knowing anything about it.

At first listen, there's not a single bad song in this album. It's tight! I loved it right away. It almost sound like a King Crimson/Genesis album. The guitar solo in Drive Home is simply euphoric. My husband who doesn't know anything about SW's music said that's probably the top 3 guitar solo he's heard.

'The Watchmaker' reminded me of Genesis' 'Cinema Show' in terms of the arrangement. It sound delightful. The title track 'The Raven that refused to sing' had some Godspeed You Black Emperor's moment which was haunting and impactful.

All in all its a great album but sound too much like a tribute album to King Crimson, Genesis and Jethro Tull. It's original but lack of originality if you know what I mean. If I hadn't heard 'Hand Cannot Erase', I would probably rate this 90 out of 100. However after listening to Hand Cannot Erase, I have to drop the score to 85/100.

A collection of Seventies' sounds in a modern surrounding, perhaps not the most original album around, but wonderfully beautiful.

That guitar solo on drive home is simply amazing