...Like Clockwork (studio album) by Queens Of The Stone Age 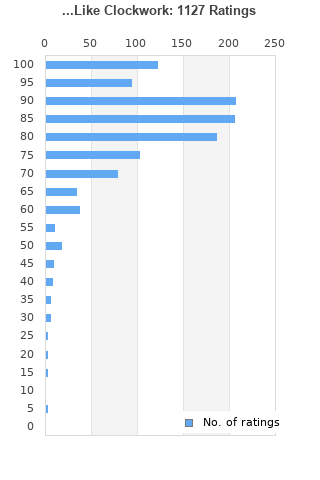 ...Like Clockwork is ranked 2nd best out of 8 albums by Queens Of The Stone Age on BestEverAlbums.com.

The best album by Queens Of The Stone Age is Songs For The Deaf which is ranked number 135 in the list of all-time albums with a total rank score of 12,296. 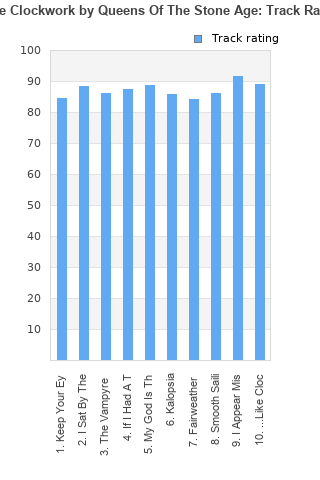 Rating metrics: Outliers can be removed when calculating a mean average to dampen the effects of ratings outside the normal distribution. This figure is provided as the trimmed mean. A high standard deviation can be legitimate, but can sometimes indicate 'gaming' is occurring. Consider a simplified example* of an item receiving ratings of 100, 50, & 0. The mean average rating would be 50. However, ratings of 55, 50 & 45 could also result in the same average. The second average might be more trusted because there is more consensus around a particular rating (a lower deviation).
(*In practice, some albums can have several thousand ratings)
This album is rated in the top 1% of all albums on BestEverAlbums.com. This album has a Bayesian average rating of 82.6/100, a mean average of 81.8/100, and a trimmed mean (excluding outliers) of 82.7/100. The standard deviation for this album is 14.2.

A monster of an album, some of the best rock from the last decade is on this.
Surprised it is not in the top 100.

This is a very well produced record and is probably the groups most consistent one as well. The record feels so smooth and you glide from song to song with ease as each song blends into one. There are also some proper amazing tracks on here, mainly near the start with the first two tracks being my favourites. The guitar is another huge strength on this record as they really hold nothing back on some of the solos. However, by the end of the record you do find yourself getting a little tired of the same style that is used for every song and while every song is good it is just missing that differentiation to be one of the greatest. Overall, a very fun album with a lot of songs you can keep coming back too.

Was very disappointed by this album. I like some of QotSA's earlier material, but it is clear to me that by 2013 this genre of rock has become stale. The lyrics feel incredibly lazy, and the production has sucked the life out of an otherwise lively band.

Not typically a fan of hard rock, but QoTSA have put a lot of great production and art-rock tinge in this. I really enjoyed it! The harder moments weren't overdone and the balladry evened out the album.

An album of this caliber is few and far between. Every song a masterpiece in it's own right. The rock, the crooning, the melodies. One of the best albums ever made.

As far as rock albums from the 10's go, you will find very few better than this one.

Some real masterpieces on this one, like 'I Appear Missing'. The Queens do what they're best at: immerse you in a slightly different world with every album, which prevents them of getting boring.