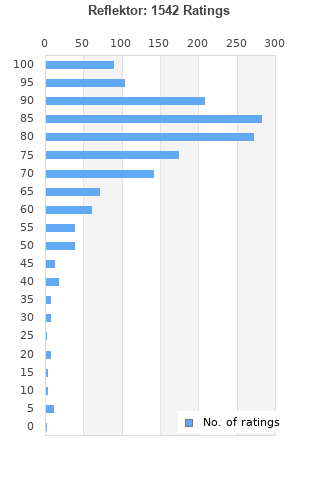 Reflektor is ranked 4th best out of 7 albums by Arcade Fire on BestEverAlbums.com.

The best album by Arcade Fire is Funeral which is ranked number 13 in the list of all-time albums with a total rank score of 49,945. 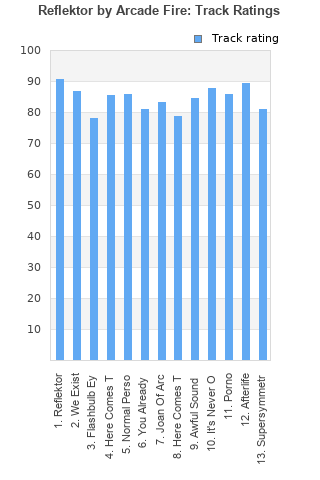 Rating metrics: Outliers can be removed when calculating a mean average to dampen the effects of ratings outside the normal distribution. This figure is provided as the trimmed mean. A high standard deviation can be legitimate, but can sometimes indicate 'gaming' is occurring. Consider a simplified example* of an item receiving ratings of 100, 50, & 0. The mean average rating would be 50. However, ratings of 55, 50 & 45 could also result in the same average. The second average might be more trusted because there is more consensus around a particular rating (a lower deviation).
(*In practice, some albums can have several thousand ratings)
This album is rated in the top 2% of all albums on BestEverAlbums.com. This album has a Bayesian average rating of 79.0/100, a mean average of 77.9/100, and a trimmed mean (excluding outliers) of 79.0/100. The standard deviation for this album is 16.0.

A below average output from Arcade Fire is better than the best from nearly all other bands.

The music is strong, the themes of the record less so.

Another phenomenal Arcade Fire album. This record is longer than their previous but they really do fill it with so much content that you don't even notice the time fly by. The songs blend into one as you go from amazing track to amazing track and hear some of the best songs the band have made. The highlights being Reflektor, Afterlife and Normal Person but all songs are great. The instrumentation is beautiful, like on all of their records, but also very experimental and fresh and sounds unique from all of their previous work and allows for so much room to explore that you could listen to this album countless time and still hear stuff you never noticed before. The lyrics are a masterclass like usual and the vocal delivery is on point as well. If you had to give the album a weakness it would be the end track (Supersymmetry) being probably 4 minutes too long but other than that everything else is sensational. Overall, this is one of my favourites of Arcade Fire's discography and I also believe it is one of their greatest.

This is the album that made me an Arcade Fire fan. Of course, you have some strong songs in the other albums but I'm always excited to watch a band move from their comfort zone and really make it. Here Comes the Night Time isn't the best song of the album but embodies that attitude: you have the frenesi of something different happening and the mellow parts that remind us they are just expanding their pallet of sounds without losing their style. I just love this album so much; I've heard it a few times before writing this and I discover new subtle sounds each time.

At the risk of being crucified by old school Arcade Fire fans: I prefer this over The Suburbs

I like this album a lot ! The change of sound is not bad (not yet) and quite refreshing. However, it's definitely too long, gets boring at the end. I have the feeling Supersymmetry is just long for no reason. Think it would be a real masterpiece with 2 or 3 tracks removed.

I had heard their earlier stuff - missed this and heard Everything Now and took a while to adjust top the change with a more electronic and almost dance sound. But this album is clearly the transition - electronic, reggae, a bit of disco and dancey. I like it and it's growing more on me with every listen.

Pretty sad this didn't take off with a lot of users on this site. Criminally underrated. James Murphy+Arcade Fire=Awesome. Easily 2nd greatest album of theirs imo. Great soundscapes and songwriting imo. I don't even notice it's a double album. Sure it's not Funeral, but it's great.

Your feedback for Reflektor