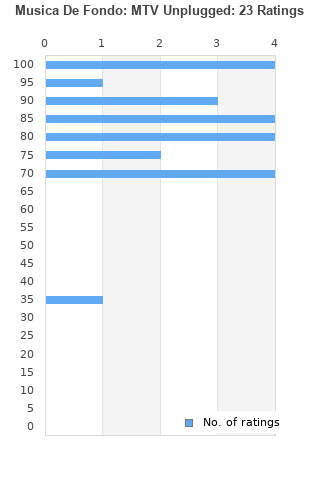 L.P.ZOE /MUSICA DE FONDO UNPLUGGED ON MTV
Condition: Used
Time left: 8d 20h 44m 16s
Ships to: Worldwide
$250.00
Go to store
Product prices and availability are accurate as of the date indicated and are subject to change. Any price and availability information displayed on the linked website at the time of purchase will apply to the purchase of this product.  See full search results on eBay

Musica De Fondo: MTV Unplugged is ranked 5th best out of 8 albums by Zoé on BestEverAlbums.com.

The best album by Zoé is Memo Rex Commander Y El Corazón Atómico De La Vía Láctea which is ranked number 8387 in the list of all-time albums with a total rank score of 139. 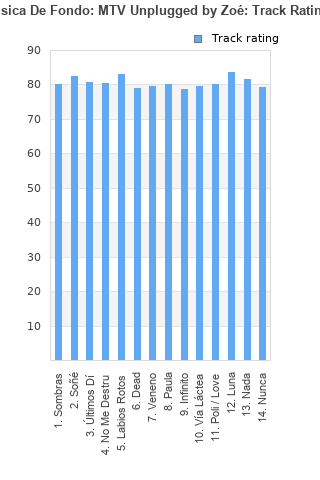 Rating metrics: Outliers can be removed when calculating a mean average to dampen the effects of ratings outside the normal distribution. This figure is provided as the trimmed mean. A high standard deviation can be legitimate, but can sometimes indicate 'gaming' is occurring. Consider a simplified example* of an item receiving ratings of 100, 50, & 0. The mean average rating would be 50. However, ratings of 55, 50 & 45 could also result in the same average. The second average might be more trusted because there is more consensus around a particular rating (a lower deviation).
(*In practice, some albums can have several thousand ratings)
This album is rated in the top 2% of all albums on BestEverAlbums.com. This album has a Bayesian average rating of 80.6/100, a mean average of 81.9/100, and a trimmed mean (excluding outliers) of 84.3/100. The standard deviation for this album is 14.3.

Most Mexican rock bands tend to very little appeal outside their home country. Much of the music just sounds like generic American arena rock sung in Spanish. There's nothing wrong with that, but just like how I won't seek out Styx, I won't seek out Jaguares when thinking about the best ever albums.

However, there are bands like Cafe Tacuba and Zoe that seamlessly incorporate their culture into their music to create a wonderful musical aesthetic.

This is a very mellow album, with some beautiful transcendent moments with the surprisingly varied instrumentation. There are pristine strings, Spanish guitars, drums, and even what sounds like a banjo at one point. The closer is a very uplifting rendition of the traditional song "Besame Mucho" that really knocks it out of the park. This is one of the best live albums I've ever heard, and I hope it gets some more recognition.