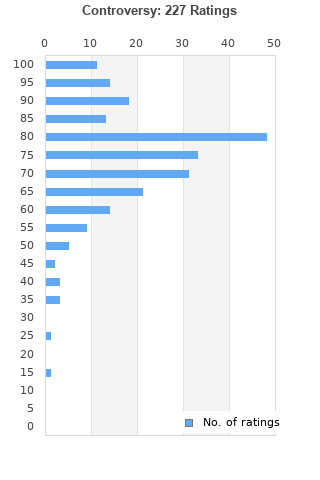 Controversy is ranked 5th best out of 60 albums by Prince on BestEverAlbums.com.

The best album by Prince is Sign 'O' The Times which is ranked number 192 in the list of all-time albums with a total rank score of 9,504. 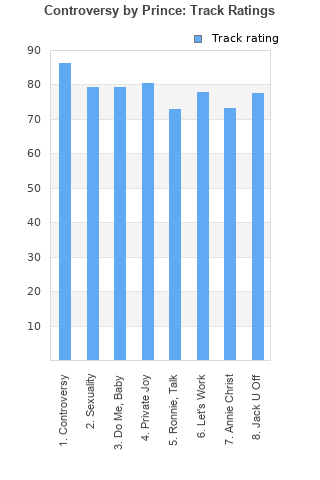 Rating metrics: Outliers can be removed when calculating a mean average to dampen the effects of ratings outside the normal distribution. This figure is provided as the trimmed mean. A high standard deviation can be legitimate, but can sometimes indicate 'gaming' is occurring. Consider a simplified example* of an item receiving ratings of 100, 50, & 0. The mean average rating would be 50. However, ratings of 55, 50 & 45 could also result in the same average. The second average might be more trusted because there is more consensus around a particular rating (a lower deviation).
(*In practice, some albums can have several thousand ratings)
This album is rated in the top 15% of all albums on BestEverAlbums.com. This album has a Bayesian average rating of 75.2/100, a mean average of 74.8/100, and a trimmed mean (excluding outliers) of 75.3/100. The standard deviation for this album is 14.4.

This album came after Dirty Mind and before 1999 and is a bit underwhelming for 80’s Prince but its still good. Best tracks for me are the title track which is a classic mission statement, Do Me Baby & Let’s Work.

Prince gets political as well as maintaining the hypersexual nature from his previous record "Dirty Mind", with mixed results. With its buzzing synths, "Annie Christian" fares better than the politically inept "Ronnie, Talk to Russia". Elsewhere we have very raunchy tracks like "Jack U Off" that work quite well, although the almost 8 minute long "Do Me, Baby" becomes slightly tedious. My favourite track is the title track, which is one of the biggest bangers of Prince's entire career. Overall a good record but a bit of a mixed bag.

Annie Christian is pretty meh, but the rest I really enjoy, and the title track may be one of his best songs ever. Overall, I don't see a big difference in quality between Dirty mind and Controversy. It's worse, but not by much.

I disagree about Annie Christian, I find it shocking.

this album's fun, funky, and also packed with meaning. Prince is an unashamed freak trying to free everyone's minds from judgment and judging. the only thing he seems to damn is christianity, but he's actually supposedly christian himself. very conflicted. and just after he pleas with pres reagan for peace with russia, talks of uniting ppl and then mass murders and the killing of lennon... well, he turns it completely around on "jack u off." that's one of the craziest, most shocking curveballs I've heard on a record. it's disorienting, disillusioning, confusing. it's like, "how?" and what else do you say about it? what's he really saying at the end there? "j/k, I don't give a fuck"? I suppose none of those topics even fit the mood of the music itself... what's he saying? it's a lot to think about. interestingly, "Ronnie, Talk To Russia" is almost still relevant in the way that it could be reworked today as "Donnie, Talk To Russia (Actually Just Resign)." in the mid 2,000's I want to say it's underrated on our overall.

Oh no, my Prince

It's Prince but not his best by a long shot. Give me the previous album, Dirty Mind, or the next, 1999, over this mishit. Annie Christian is bad (and I'm not getting down with kids), I mean really bad, as in awful - it must be the worst track he ever did.

Not as good as, dirty mind, but still okay, just a little unsure of where he wants to go. The next record is where it really starts.

For the most part the songs are there and the instrumentation is very good. The production makes this album sound very dated, almost sun bleached but some of the songs make up for that.

Your feedback for Controversy