Around The World In A Day by Prince And The Revolution
Year: 1985
Overall rank: 1,287th 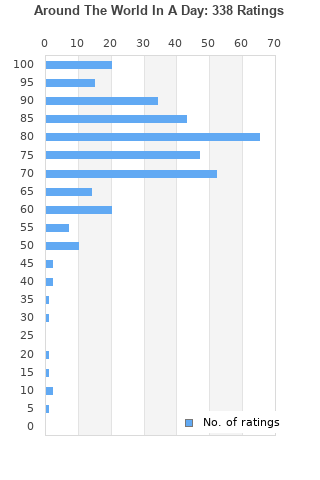 PRINCE AND THE REVOLUTION AROUND THE WORLD IN A DAY ORIGINAL VINYL LP
Condition: Used
Time left: 9h 44m 7s
Ships to: Worldwide
£9.99
Go to store
Product prices and availability are accurate as of the date indicated and are subject to change. Any price and availability information displayed on the linked website at the time of purchase will apply to the purchase of this product.  See full search results on eBay

Around The World In A Day is ranked 3rd best out of 3 albums by Prince And The Revolution on BestEverAlbums.com.

The best album by Prince And The Revolution is Purple Rain which is ranked number 83 in the list of all-time albums with a total rank score of 18,272.

Listen to Around The World In A Day on YouTube 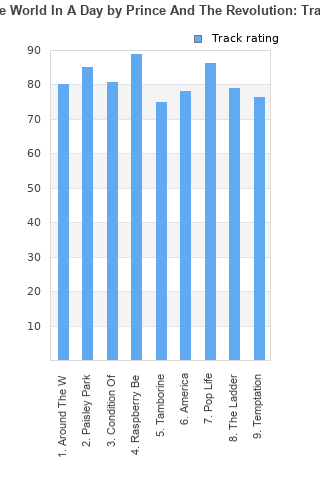 Around The World In A Day rankings

Around The World In A Day collection

Around The World In A Day ratings

Rating metrics: Outliers can be removed when calculating a mean average to dampen the effects of ratings outside the normal distribution. This figure is provided as the trimmed mean. A high standard deviation can be legitimate, but can sometimes indicate 'gaming' is occurring. Consider a simplified example* of an item receiving ratings of 100, 50, & 0. The mean average rating would be 50. However, ratings of 55, 50 & 45 could also result in the same average. The second average might be more trusted because there is more consensus around a particular rating (a lower deviation).
(*In practice, some albums can have several thousand ratings)
This album is rated in the top 4% of all albums on BestEverAlbums.com. This album has a Bayesian average rating of 77.8/100, a mean average of 76.7/100, and a trimmed mean (excluding outliers) of 77.9/100. The standard deviation for this album is 15.0.

Around The World In A Day favourites

Around The World In A Day comments

Prince unleashes his psychedelic side here with a luscious musical palette and abstruse lyrical content. The album sees turns of style from energetic performances to tender ballads and delivers both with equal intent. A true high point of the 80s which has stood the test of time admirably.
Best Track: Pop Life

Around the World in a Day is Prince's most psychedelic release. The singles are fantastic and the rest of the album does not disappoint.

The Grand and Sublim Follow-Up to the Masterpiece "Purple Rain".

His weakest from the '80s I'd say. Really doesn't stick with me.

Yes, it's no "Purple Rain", but this follow-up record from Prince & The Revolution should not be easily discarded. Prince goes psychedelic and it works ! "Around the World in a Day" is a solid record where every single track is either a good or a great one. I have a handful of favourites from this one: "Paisley Park", "America" (political subtext handled really well by Prince here), "Raspberry Beret" of course, although the best one here is "The Ladder" which fully embraces the existential. A very good album, bordering on greatness.

This was Prince's best album when it came out in my opinion. I feel this is when he started to do what he really wanted. It is super weird, which is good.

I think I prefer this album to Purple Rain. It is very minimalist in the instrumental backing of some tracks like Paisley Park but also very clever. I absolutely love 'Condition of the Heart' and 'The Ladder'. In years to come I predict that this will be considered a masterpiece like the Beatles SPLHCB!

How I fought trying to love this album. But no. The ers was over...

Not his best album, but perhaps his most ambitious and strange. It's definitely a grower and will alienate fans of Purple Rain and other hits, aside from the baroque pop classic "Raspberry Beret", which everyone loves as much as the next Prince fan. This one is tied with Lovesexy and The Black album as his weirdest, but also most affecting work, I would say. It does have my favorite Prince song: "Temptation", which I consider to be one of the greatest vocal performances ever, even if it degenerates into the usual Prince cheese in the last few minutes. Despite all the talking, the jazz music going on behind it is fascinating. It's certainly worth giving a chance even if you don't like every single song.

A great album that was unfortunately overshadowed by the success of Purple Rain. Prince showcases his musical taste and ability once more featuring some very Beatlesque tracks like Raspberry Beret and Paisley Park or some very wild tracks like Temptation.

Your feedback for Around The World In A Day