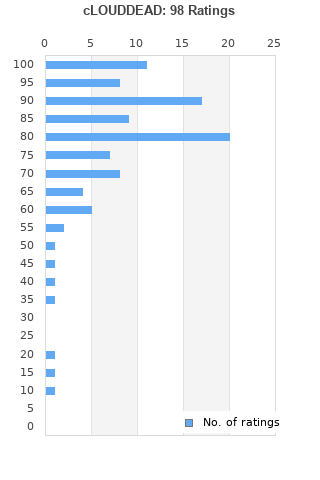 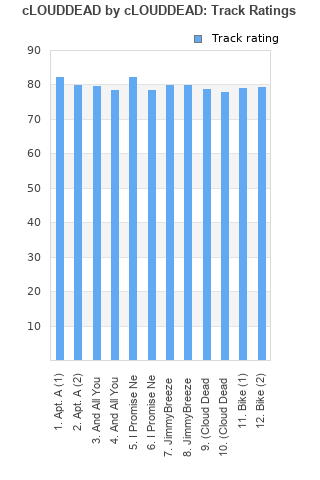 Rating metrics: Outliers can be removed when calculating a mean average to dampen the effects of ratings outside the normal distribution. This figure is provided as the trimmed mean. A high standard deviation can be legitimate, but can sometimes indicate 'gaming' is occurring. Consider a simplified example* of an item receiving ratings of 100, 50, & 0. The mean average rating would be 50. However, ratings of 55, 50 & 45 could also result in the same average. The second average might be more trusted because there is more consensus around a particular rating (a lower deviation).
(*In practice, some albums can have several thousand ratings)
This album is rated in the top 2% of all albums on BestEverAlbums.com. This album has a Bayesian average rating of 80.1/100, a mean average of 78.7/100, and a trimmed mean (excluding outliers) of 80.8/100. The standard deviation for this album is 18.1.

This is kinda weird, I dunno how to describe it. Experimental / Ambiant Trip Hop is my best attempt

Yes, it's hip-hop but what's that it's hiding behind?

CLOUDDEAD is a world of its own. The atmospheric dream-like beats flow into the album from the edges of space, slowly coming together into a loosely held congregation of the kind of hypnotic and emotionally evocative electronic twinklings and drones reminiscent of some of BoC's more spacious works. Before the voices of this Anticon group even come into play, you are already floating amidst this loose conglomeration of sounds, fully immersing you in cLOUDDEAD's mystical and somewhat unsettling world, just in time for the voices of this hip-hop collective to phase in and out of the album's hypnotic core; to dance across the periphery of but never quite statically settle within this dream that you are now a part of. The voice drift in and out, whispering thoughts of paranoia and regret, some concrete and relatable, some more abstract, but with an intended expression no less easy to understand. These voices soon become an intrinsic part of cLOUDDEAD's unique atmosphere. This is the album that you hear in your most worried of dreams