Chaos And Creation In The Backyard (studio album) by Paul McCartney 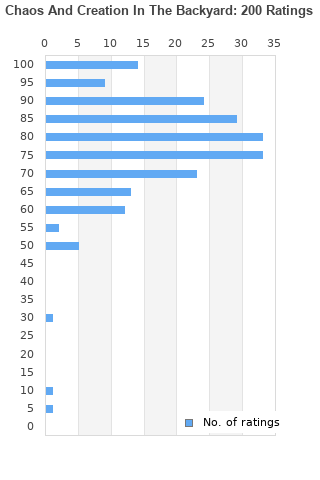 Chaos and Creation in the Backyard - By Paul McCartney - Like New CD10
Condition: Like New
Time left: 3h 17m 29s
Ships to: Worldwide
$8.00
Go to store

Paul McCartney Chaos And Creation In The Backyard (Special Edition) CD Album Set
Condition: Very Good
Time left: 6h 58m 9s
Ships to: Worldwide
£5.00
Go to store
Product prices and availability are accurate as of the date indicated and are subject to change. Any price and availability information displayed on the linked website at the time of purchase will apply to the purchase of this product.  See full search results on eBay

Chaos And Creation In The Backyard is ranked 2nd best out of 44 albums by Paul McCartney on BestEverAlbums.com.

The best album by Paul McCartney is McCartney which is ranked number 1622 in the list of all-time albums with a total rank score of 1,070.

Listen to Chaos And Creation In The Backyard on YouTube 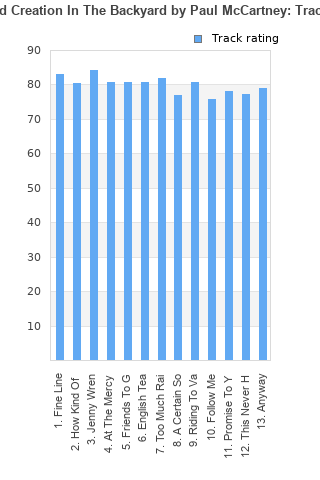 Chaos And Creation In The Backyard rankings

Chaos And Creation In The Backyard collection

Chaos And Creation In The Backyard ratings

Rating metrics: Outliers can be removed when calculating a mean average to dampen the effects of ratings outside the normal distribution. This figure is provided as the trimmed mean. A high standard deviation can be legitimate, but can sometimes indicate 'gaming' is occurring. Consider a simplified example* of an item receiving ratings of 100, 50, & 0. The mean average rating would be 50. However, ratings of 55, 50 & 45 could also result in the same average. The second average might be more trusted because there is more consensus around a particular rating (a lower deviation).
(*In practice, some albums can have several thousand ratings)
This album is rated in the top 3% of all albums on BestEverAlbums.com. This album has a Bayesian average rating of 78.6/100, a mean average of 77.5/100, and a trimmed mean (excluding outliers) of 78.9/100. The standard deviation for this album is 14.9.

Chaos And Creation In The Backyard favourites

Chaos And Creation In The Backyard comments

Pretty decent McCartney lp coming at this late date. Lyrically it's very good and there's an overall pleasant acoustic piano based sound. However for a McCartney album it's really lacking in hooks and catchy melodies two of his biggest strengths. Not sure what Godrich contributed. His trademark dense production style and unexpected nuggets of sound seem to be missing. Overall a decent recording.

This is one of Paul McCartney's most interesting albums. Chaos and creation, is predominantly acoustic in sound, and is much more challenging in structure than most McCartney records, maybe only his self titled albums from 1970 and 1980 compare. Having said that, the songs here are much more thought out and focused. Opener, fine line, is okay, but it actually one of the less interesting tracks here, in fact to me it sounds like the theme tune to only fool's and horses. How kind of you, is a better example of the album, and like, at the mercy, and, riding to vanity fair, is not predictable. The strongest songs though are the blackbird-like, Jenny Wren, the rubber soul-is, friends to go, the excellent, too much rain, and the beautiful, a certain softness. The rest is fine, like, follow me, and, the slightly tongue in cheek, English tea(very twee, very me). A very good album then, definitely one of McCartney's top six or seven.

Very nice album with haunting harmonies. Godrich's really gave the twist to McCartney's music and revealed his other side.
How Kind of You and Jenny Wren are superb songs!

The album is really worth listening attentively, even though the last 3/4 tracks are out of context.

A good album from McCartney one of the best he has recorded as a solo artist. Best tracks are Anyway, At the Mercy, Fine Line and Riding To Vanity Fair.

A wonderful piece of work, mostly performed solo (a multi-instrumentalist at the top of his game), with Nigel Godrich overseeing the proceedings.

Your feedback for Chaos And Creation In The Backyard