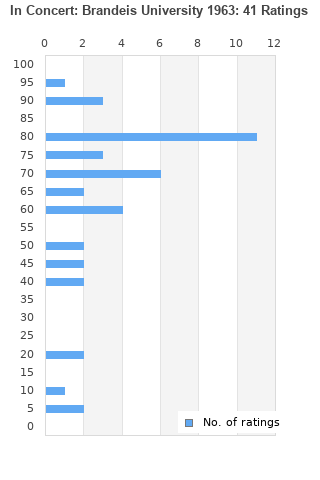 In Concert: Brandeis University 1963 is ranked 55th best out of 74 albums by Bob Dylan on BestEverAlbums.com.

The best album by Bob Dylan is Highway 61 Revisited which is ranked number 26 in the list of all-time albums with a total rank score of 36,213.

Tickets from Ticketmaster Get tickets
May
28
Sat
21:00 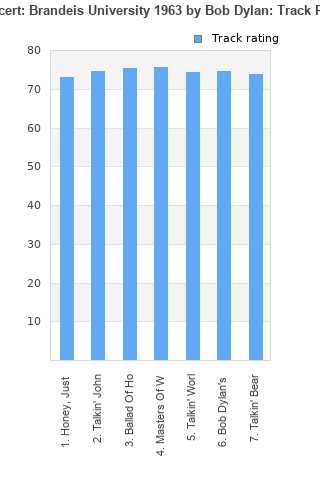 Rating metrics: Outliers can be removed when calculating a mean average to dampen the effects of ratings outside the normal distribution. This figure is provided as the trimmed mean. A high standard deviation can be legitimate, but can sometimes indicate 'gaming' is occurring. Consider a simplified example* of an item receiving ratings of 100, 50, & 0. The mean average rating would be 50. However, ratings of 55, 50 & 45 could also result in the same average. The second average might be more trusted because there is more consensus around a particular rating (a lower deviation).
(*In practice, some albums can have several thousand ratings)
This album has a Bayesian average rating of 65.2/100, a mean average of 63.3/100, and a trimmed mean (excluding outliers) of 63.3/100. The standard deviation for this album is 23.7.

Interesting to listen to a show recorded before Freewheelin' was released. Ballad of Hollis Brown and Masters of War are the standouts for me.


This record is pretty interesting, pretty laid back, nothing amazing or mind blowing. But there is something just enjoyable to hear Dylan doing such a talkin' blues-heavy gig (more than a third the album is talkin' blues). And the rendition here of "Ballad of Hollis Brown" is pretty chilling. "Talkin' Bear Mountain Picnic Massacre Blues" is brilliant and funny and witty and delivered in such a cool, classic way! That's my favorite highlight here for sure. "Talkin' World War III" is pretty beautiful too.

All in all this is not an album I'd say is a must own but it is something to check out if you're trying to check out more early Dylan. It's got good vibes and I really like it.

Your feedback for In Concert: Brandeis University 1963