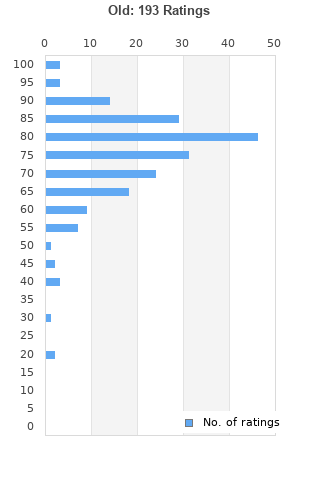 Danny Brown - Old - Danny Brown CD 0IVG The Fast Free Shipping
Condition: Very Good
Time left: 2d 13h 6m 32s
Ships to: Worldwide
$10.41
Go to store
Product prices and availability are accurate as of the date indicated and are subject to change. Any price and availability information displayed on the linked website at the time of purchase will apply to the purchase of this product.  See full search results on eBay

Old is ranked 4th best out of 7 albums by Danny Brown on BestEverAlbums.com.

The best album by Danny Brown is Atrocity Exhibition which is ranked number 321 in the list of all-time albums with a total rank score of 6,146. 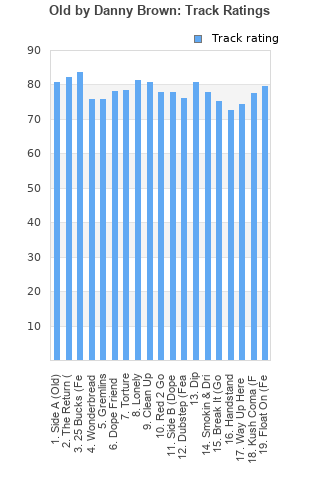 Rating metrics: Outliers can be removed when calculating a mean average to dampen the effects of ratings outside the normal distribution. This figure is provided as the trimmed mean. A high standard deviation can be legitimate, but can sometimes indicate 'gaming' is occurring. Consider a simplified example* of an item receiving ratings of 100, 50, & 0. The mean average rating would be 50. However, ratings of 55, 50 & 45 could also result in the same average. The second average might be more trusted because there is more consensus around a particular rating (a lower deviation).
(*In practice, some albums can have several thousand ratings)
This album is rated in the top 13% of all albums on BestEverAlbums.com. This album has a Bayesian average rating of 75.4/100, a mean average of 74.6/100, and a trimmed mean (excluding outliers) of 75.5/100. The standard deviation for this album is 12.6.

I was originally planning to hear Atrocity Exhibition to see if I was a fan of the album or would be indifferent to it. And though I do want to go back to it, I decided to listen to this. And I find this underrated as fuck. This record is insane. The first half of this record is where Danny Brown gets introspective while instrumentals are very otherworldly some what dreamy. While the second half of this albums is very hedonistic where these beats are loud and have a hype sensibility. And the funny thing is, I thought I was going to hate the second half of this album after reading some of the comments for this album. I'm not for the Coachella type electronics. But I fuck with this. Hell songs like Dip and Smokin & Drinkin have that drum rise that leads to a payoff that wouldn't please me. But in here, it just works. Plus not only are there catchy hooks in some of these songs, but songs like Dubstep and Smokin and Drinkin are off the norm for the simple festival electronics. As well as ending with the moody Float On. The only song that doesn't work here and kinda bugs me is the Side B song. Other then that, this was quite insane.

It's funny; I was thinking about my comments on this album, and wondering if anyone would take issue with them... then I read what everyone else wrote. Side A got my interest peaked; great production, insightful lyrics, great delivery. Side B enhances the production; it's a really good time, especially if you don't listen to the lyrics. Call me an old prude, but I'm a little tired of the 'getting my dick sucked' + weed lyrics. Nothing wrong with those things, but hopefully there's more to Danny Brown's life than that. A little sophomoric & formulaic, and it tarnishes the album. Too bad.

I actually loved the contrast, first half being conscious and second half being turned up and ignorant. The second half is also AMAZING if you want to turn up your speakers and go wild!

solid first half, but the second half (like many people have already said) is a big letdown. After exercising his creative psyche in the first half, it's almost as though Danny got completely lazy and decided to half-ass the rest of the album with listless gangsta-rap chantings and mediocre production. In fact you could go so far to say that you could make a freakin drinking game with the amount of times Danny chants "sup!" in the background of this album.
Thankfully, "Float On" with it's obvious sense of direction and potently-charming harmonies by Charli-XCX, save Old from crumbling under the weight of superficial "molly rap".
If songs like 25 Bucks, Lonely and Float On are any indicator- Danny Brown is not just a wordsmith of worthwhile potential but also a friggin-decent producer as well.
Still, i just cant get over the last half. Maybe it was all done in irony, but many of those songs just represent how annoying contemporary hip-hop has become.

Side B is still pretty good. It does have some complete flops like Handstand and Break It, but I think Kush Coma, Smokin And Drinkin and Float On are some of, if not, the best tracks on the album.

I'm confused on why ODB didn't make the cut.. It's an excellent song, and would have fit nicely on the second side of the album. Shame about that.

But yeah, it's good. Worth listening to, but just not his masterpiece.

I really liked XXX it had it's own charm that no other hip-hop album really had. Old's first half is really honest and full of great bars and Danny really channels his feelings and he goes all out. The production is extremely good on a lot of tracks, but on the second half a lot of songs are sloppily produced for the simple reason of try to keep with current hip-hop trends and the second half is well overdue with overdone molly rap and hype tracks. I hope Danny Brown keeps going strong, there may be a few duds here but I like it.

Favorite tracks: Side A, The Return, and Gremlins

It's not bad but I think I'd much prefer an instrumental version.

best hip-hop album of the year !

Your feedback for Old