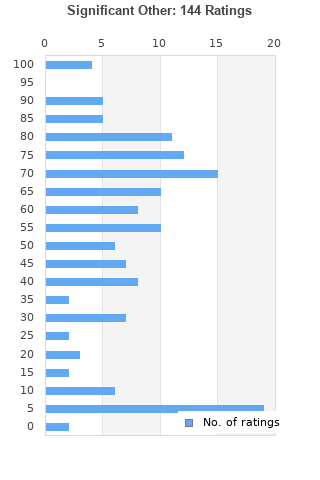 Significant Other is ranked 2nd best out of 9 albums by Limp Bizkit on BestEverAlbums.com.

The best album by Limp Bizkit is Chocolate Starfish And The Hot Dog Flavored Water which is ranked number 3781 in the list of all-time albums with a total rank score of 376. 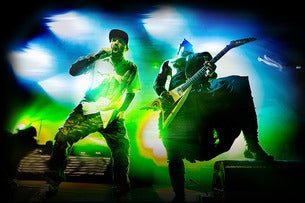 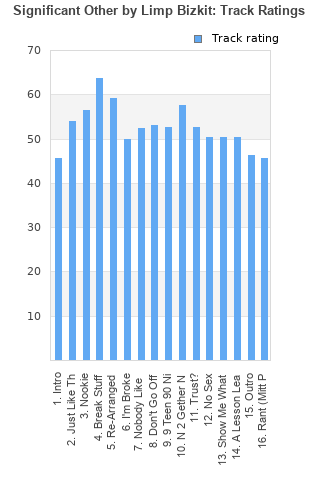 The tracks on this album have an average rating of 48 out of 100 (all tracks have been rated).

Rating metrics: Outliers can be removed when calculating a mean average to dampen the effects of ratings outside the normal distribution. This figure is provided as the trimmed mean. A high standard deviation can be legitimate, but can sometimes indicate 'gaming' is occurring. Consider a simplified example* of an item receiving ratings of 100, 50, & 0. The mean average rating would be 50. However, ratings of 55, 50 & 45 could also result in the same average. The second average might be more trusted because there is more consensus around a particular rating (a lower deviation).
(*In practice, some albums can have several thousand ratings)
This album has a Bayesian average rating of 51.0/100, a mean average of 49.2/100, and a trimmed mean (excluding outliers) of 49.2/100. The standard deviation for this album is 28.1.

Honestly? Not that bad. Some good songs found on it, and the band backing Durst is exceptionally talented. I like "Break Stuff" and "Nookie"

Nookie and Break Stuff are my two all time favorite songs. The album overall is above average, but I just can't help overweighting a few songs on this disk

I still love Break Stuff even though it's super simple.

Nookie was a pretty big hit.

Their album art work is probably the best part of this record.

Limp Bizkit doesn't take themselves as seriously as their contemporaries do. They have more fun with it all.

Still not as good as hot dog flavored water even though the latter is way more silly. Here Limp Bizkit still wants to be respected as a band which is a big fail. They gave up shooting for respectability after this effort

One of the greatest albums yet.

Starts of strong but back half doesn't measure up...still a big improvement over debut album....It still rocks though after many years...ironically even though they were popular at this time and unpopular later..they later albums were much better.

This album is a whole lot of fun. It's energetic, agressive and humorous, and also one of the first big time albums to blend hip-hop and metal. "Break Stuff" and "Nookie" are great tunes. These guys deserved a lot of the flack they took for their later work, but this album is rock solid.

Ugh... How many people are embarassed by their tastes as teenagers? This band screams immature and hormonal pretending to be tough and conflicted.

I completely agree with lightmyway

This was their big breakthrough, the album that made them famous to some and infamous to everyone else. They get ripped on a lot by people who make the mistake of taking them too seriously. I don't take this seriously and I doubt Fred Durst and friends did either. It's just a fun goofy rap rock party album for frat boys, and it's a good one!

Break Stuff is easily one of the worst songs in history.

Your feedback for Significant Other