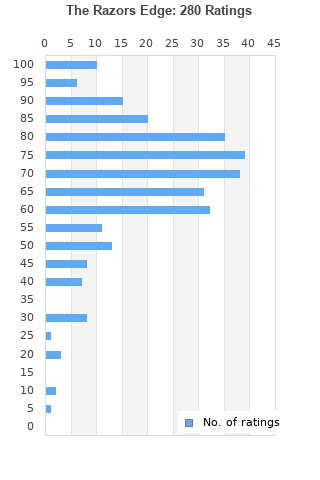 The Razors Edge is ranked 8th best out of 28 albums by AC/DC on BestEverAlbums.com.

The best album by AC/DC is Back In Black which is ranked number 135 in the list of all-time albums with a total rank score of 12,292. 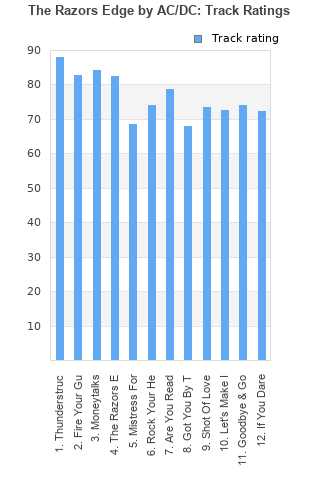 Rating metrics: Outliers can be removed when calculating a mean average to dampen the effects of ratings outside the normal distribution. This figure is provided as the trimmed mean. A high standard deviation can be legitimate, but can sometimes indicate 'gaming' is occurring. Consider a simplified example* of an item receiving ratings of 100, 50, & 0. The mean average rating would be 50. However, ratings of 55, 50 & 45 could also result in the same average. The second average might be more trusted because there is more consensus around a particular rating (a lower deviation).
(*In practice, some albums can have several thousand ratings)
This album has a Bayesian average rating of 70.4/100, a mean average of 69.6/100, and a trimmed mean (excluding outliers) of 70.3/100. The standard deviation for this album is 18.2.

It has the best AC/DC track of all time in Thunderstruck but after that it's a pretty ordinary album. Way better AC/DC albums out there but OK for a casual listen

Maybe the most commercial album of the band, but easy going to be listened; always funny to hear.

Not really a good album. Only a few songs are decent, title track being my favorite on this. It seemed like the ideas and song writing creativity had dried up. It was only Thunderstruck that caused any re-ignition for the band. Not one to pull out and listen to very often. There are many that are better.

A record that goes somewhat downhill after the first three tracks (which are superb). Not terrible by any means, but it can be very uninspired at times.

The first 4 tracks would make a fine EP the rest is pretty ordinary.

This isn't a bad album - "Thunderstruck" and "Money Talks" rank among their finest work. However, nothing else really stands out.

A terrible record. I mean, thunderstruck, and, money talks, are not bad tracks, but can you imagine Bon Scott singing this crap. And, mistress for Christmas? Awful.

Thunderstruck leads a fantastic album. I mean the guitars are fun and everything I wanted.

Your feedback for The Razors Edge