Seconds Out (live album) by Genesis 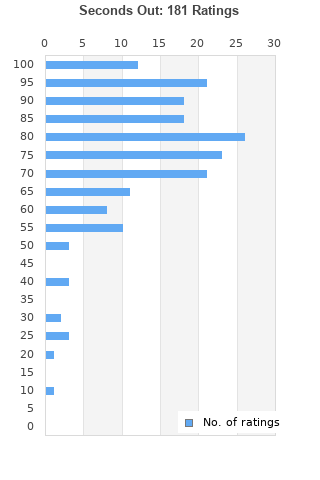 Seconds Out is ranked 12th best out of 33 albums by Genesis on BestEverAlbums.com. 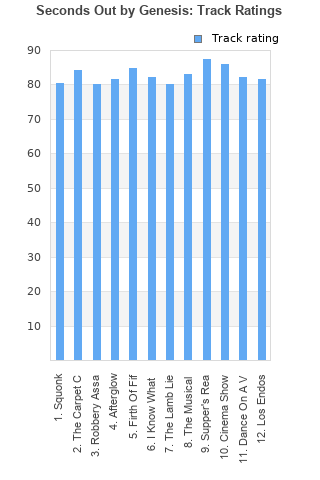 Rating metrics: Outliers can be removed when calculating a mean average to dampen the effects of ratings outside the normal distribution. This figure is provided as the trimmed mean. A high standard deviation can be legitimate, but can sometimes indicate 'gaming' is occurring. Consider a simplified example* of an item receiving ratings of 100, 50, & 0. The mean average rating would be 50. However, ratings of 55, 50 & 45 could also result in the same average. The second average might be more trusted because there is more consensus around a particular rating (a lower deviation).
(*In practice, some albums can have several thousand ratings)
This album is rated in the top 5% of all albums on BestEverAlbums.com. This album has a Bayesian average rating of 76.6/100, a mean average of 76.1/100, and a trimmed mean (excluding outliers) of 76.8/100. The standard deviation for this album is 17.7.

Pretty good and often played but for me the standout is Supper's Ready.

One of the great live albums, completely under-rated on this site.

In a similar way that Bowie took on the persona of an androgynous alien guitarist for his Ziggy shows, for this tour Peter Gabriel assumed the role of a small irritating cockney drummer who by accident ends up fronting a prog band instead of his usual amateur Motown tribute outfit.

Plays like a greatest hits LP, with some stunning performances. Makes one wonder how much stronger they would have been had Peter Gabriel remained with them.

Solid live out that proves they are just fine without Peter Gabriel.

Your feedback for Seconds Out