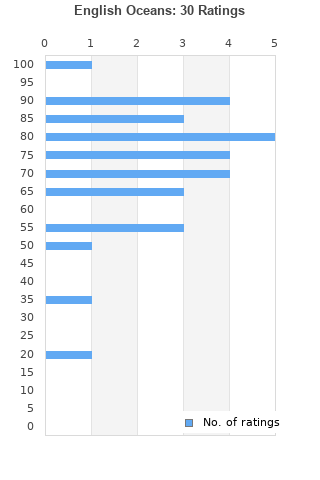 Drive-By Truckers - English Oceans [CD]
Condition: Very Good
Time left: 2d 7h 41m 40s
Ships to: Worldwide
$5.99
Go to store
Product prices and availability are accurate as of the date indicated and are subject to change. Any price and availability information displayed on the linked website at the time of purchase will apply to the purchase of this product.  See full search results on eBay

English Oceans is ranked 8th best out of 18 albums by Drive-By Truckers on BestEverAlbums.com.

The best album by Drive-By Truckers is Southern Rock Opera which is ranked number 2182 in the list of all-time albums with a total rank score of 751. 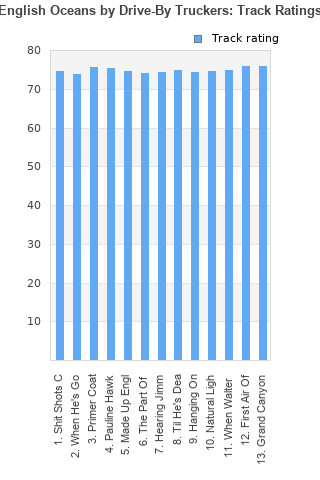 Rating metrics: Outliers can be removed when calculating a mean average to dampen the effects of ratings outside the normal distribution. This figure is provided as the trimmed mean. A high standard deviation can be legitimate, but can sometimes indicate 'gaming' is occurring. Consider a simplified example* of an item receiving ratings of 100, 50, & 0. The mean average rating would be 50. However, ratings of 55, 50 & 45 could also result in the same average. The second average might be more trusted because there is more consensus around a particular rating (a lower deviation).
(*In practice, some albums can have several thousand ratings)
This album has a Bayesian average rating of 71.5/100, a mean average of 70.9/100, and a trimmed mean (excluding outliers) of 70.9/100. The standard deviation for this album is 17.7.

After the departure of Jason Isbell, whom I thought was the strongest songwriter in Drive-By Truckers, my expectations going into each subsequent album have been modest. My concerns have mostly been unfounded, though, as Patterson Hood and Mike Cooley have shown themselves up to the task of carrying the band forward and keeping their themes politically relevant and poignant. While I basically like Shonna Tucker, I think her leaving the band actually helped Hood and Cooley sharpen their focus a bit and trim down the number of tracks on their albums, meaning a slightly leaner and better distilled body of work. On English Oceans my favorite track is probably "Grand Canyon," a meditation on how we construct meaning from beautiful places we visit in the midst of the messy chaos of living. It's a wise and mature piece of work, particularly satisfying in the context of the band's wider body of work, which has always brought the passion but not necessarily sophistication.

Prior to this release, Drive-By Truckers released two albums in two years, neither of which did much for me. It seemed the primary songwriters, Patterson Hood and Mike Cooley, had gotten obsessed with true crime stories and A.M. country radio, respectively. But this album is a return to form. It doesn't match their best works, from the early 2000s, but it's definitely their best album in years.

So much better than their previous 2 records. Cooley seems to be back to his old storytelling self, and Patterson a couple songs that can compete with some of his best.

I'm a huge fan of DBT's & I have to say, @ 1st listen, this is really disappointing. I hope that it grown on my but right now, not sure how often I'm going to play this.

Your feedback for English Oceans