The Gay Parade (studio album) by of Montreal 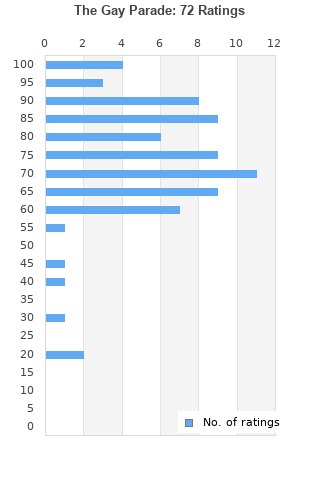 The Gay Parade is ranked 5th best out of 26 albums by of Montreal on BestEverAlbums.com.

The best album by of Montreal is Hissing Fauna, Are You The Destroyer? which is ranked number 469 in the list of all-time albums with a total rank score of 4,153.

Dalton and the Sheriffs
The Yarmouth Drive-In on Cape Cod, Yarmouth, United States. 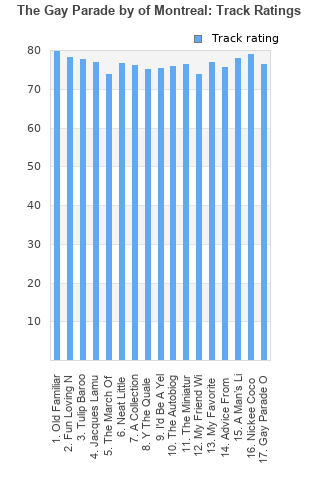 1
15.
A Man’s Life Flashing Before His Eyes While He And His Wife Drive Off A Cliff Into The Ocean
Rating: 78 (12 votes)Comments:

Rating metrics: Outliers can be removed when calculating a mean average to dampen the effects of ratings outside the normal distribution. This figure is provided as the trimmed mean. A high standard deviation can be legitimate, but can sometimes indicate 'gaming' is occurring. Consider a simplified example* of an item receiving ratings of 100, 50, & 0. The mean average rating would be 50. However, ratings of 55, 50 & 45 could also result in the same average. The second average might be more trusted because there is more consensus around a particular rating (a lower deviation).
(*In practice, some albums can have several thousand ratings)
This album is rated in the top 8% of all albums on BestEverAlbums.com. This album has a Bayesian average rating of 76.1/100, a mean average of 75.7/100, and a trimmed mean (excluding outliers) of 76.6/100. The standard deviation for this album is 15.6.

It's fun and enjoyable and all... but it's also sort of annoying, isn't it? Those buzzing voices or flutes or horns or what it is!

A great album to lighten up the mood. Most of the songs are silly but infectiously catchy, never dragging too much to be bothersome. It doesn't have a hit, a song I'd name fantastic, but it doesn't have any weak song either

It's just amazing. It flows from one track to the next, it has a concept yet is still really accesible and each track had a terrific character story.

If you just added the album, it should automatically show up in a day or two, along with release date.

How can you add the picture for the album?

Your feedback for The Gay Parade