In The Flat Field (album) by Bauhaus 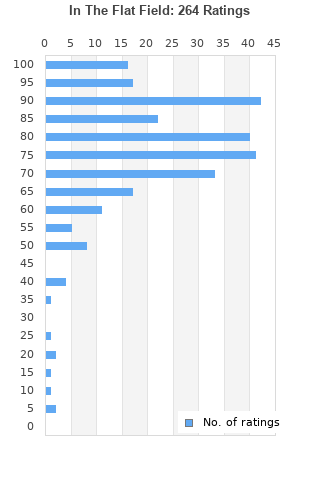 In The Flat Field is ranked as the best album by Bauhaus. 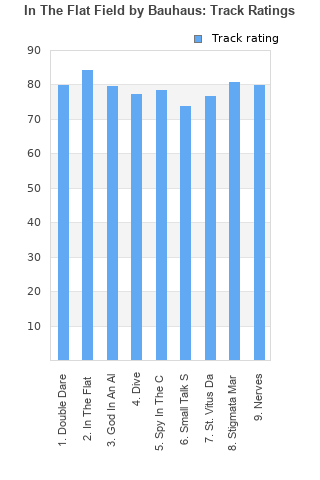 In The Flat Field rankings

In The Flat Field collection

In The Flat Field ratings

Rating metrics: Outliers can be removed when calculating a mean average to dampen the effects of ratings outside the normal distribution. This figure is provided as the trimmed mean. A high standard deviation can be legitimate, but can sometimes indicate 'gaming' is occurring. Consider a simplified example* of an item receiving ratings of 100, 50, & 0. The mean average rating would be 50. However, ratings of 55, 50 & 45 could also result in the same average. The second average might be more trusted because there is more consensus around a particular rating (a lower deviation).
(*In practice, some albums can have several thousand ratings)
This album is rated in the top 2% of all albums on BestEverAlbums.com. This album has a mean average rating of 78.0/100. The trimmed mean (excluding outliers) is 79.5/100. The standard deviation for this album is 16.3.

In The Flat Field favourites

In The Flat Field comments

Striking debut album from an influential band. The sound is omnious and hypnotic. Best tracks for me are Double Dare, The Title Track and Stigmata Martyr.

Like all Bauhaus albums (imho), the songs are hit or miss. "Stigmata Martyr" is an untouchable gother-than-sin masterpiece, and "In the Flat Field" and "Double Dare" are up there too. But then there are tracks like "Dive" that you just have to suffer through. I admire Bauhaus for their adventurousness, but they're at their best when their funkier ambitions slip into background.

Good debut album from Bauhaus. Dark, gloomy, and abrasive. Stigmata Martyr has got to be the best track from this album

Was not expecting this. Much more jagged and abrasive than I thought it would be. Very good though, it brings back much of the aggression about punk that post punk had left behind.

Up there with anything joy division ever produced!

Small Talk Stinks is unbearable, however Stigmata Martyr makes up for it though.

Weird bunch of sounds and odd arrangements add together to make something listenable. Like coming from the storm after your car has broken into what you think is a haunted house. While the elements are worse than a scare, you find it is he home of an eccentric and dark band. They are playing the basement. Good stuff. Remember to check out 'Bela Lugosi's Dead' as well. I really liked that song but it isn't on here.

Your feedback for In The Flat Field