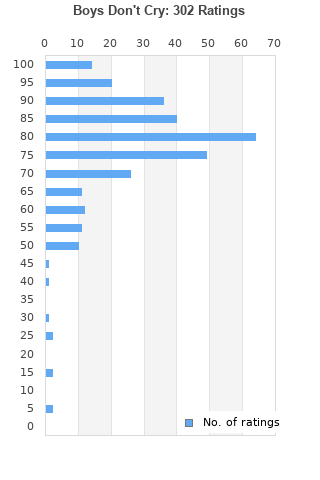 THE CURE - Boys Don't Cry ~ 7" Single PS
Condition: Used
Time left: 21h 14m 23s
Ships to: Worldwide
£89.49
Go to store
Product prices and availability are accurate as of the date indicated and are subject to change. Any price and availability information displayed on the linked website at the time of purchase will apply to the purchase of this product.  See full search results on eBay

Boys Don't Cry is ranked 10th best out of 35 albums by The Cure on BestEverAlbums.com.

The best album by The Cure is Disintegration which is ranked number 35 in the list of all-time albums with a total rank score of 31,311. 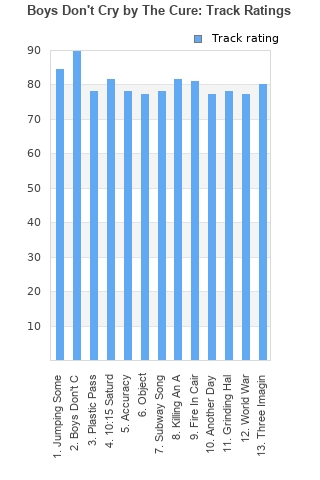 Rating metrics: Outliers can be removed when calculating a mean average to dampen the effects of ratings outside the normal distribution. This figure is provided as the trimmed mean. A high standard deviation can be legitimate, but can sometimes indicate 'gaming' is occurring. Consider a simplified example* of an item receiving ratings of 100, 50, & 0. The mean average rating would be 50. However, ratings of 55, 50 & 45 could also result in the same average. The second average might be more trusted because there is more consensus around a particular rating (a lower deviation).
(*In practice, some albums can have several thousand ratings)
This album is rated in the top 3% of all albums on BestEverAlbums.com. This album has a Bayesian average rating of 78.2/100, a mean average of 77.0/100, and a trimmed mean (excluding outliers) of 78.4/100. The standard deviation for this album is 14.8.

At first I didn't quite like this album (though I certainly rate it much higher than Three Imaginary Boys) as much as I love the other Cure albums. Maybe that was because I wasn't very fond of this beginner punk style, but as the years have gone by, I find myself revisiting this album a lot! Certainly they sound so young and unexperienced, but that's what gives this album its charm. So so good.

I like this album better than Three Imaginary Boys. The added tracks really do the album good. And some lesser tracks are dropped. I don't regard this as a compilation..

This was the American equivalent of the British release Three Imaginary Boys.

This is basically a modified version of their debut album, Three Imaginary Boys. It's a good modification though, as it takes out some poor songs and replaces them with classics like Boys Don't Cry, Killing An Arab, etc.

seventeen seconds and boys don't cry - one band, one year - two worlds. on the one hand this dirty-punk-surf-rock-compliation of baseline-driven singles with the giggeling voice of robert. on the other hand the dark-gothic-piece-of-art.
before my very eyes it's easily seventeen seconds. but this one has it's moments too.

Easily my favourite Cure album (OK I know it's classed as a compilation but only just). The tracks added here improve Three Imaginary Boys by someway. I love the feel and production of these songs, kinda sparse and the bass guitar sounds great. It also has of course the timeless 'Boy's Don't Cry' and the wonderful Fire in Cairo. To be honest I really like every track here. Just a great record.

I fell in love with this album when I first heard it...hmm...33 years ago. Still remains my favorite Cure album and always a good listen.

Ah The Cure. Such a good band. This is the US version of their first album, Three Imaginary Boys. It replaces a few songs on that one with some singles and things. It's a great first album, but I can't say whether or not it's better than TIB because I haven't heard that album. This isn't goth yet but it doesn't need to be.

Your feedback for Boys Don't Cry