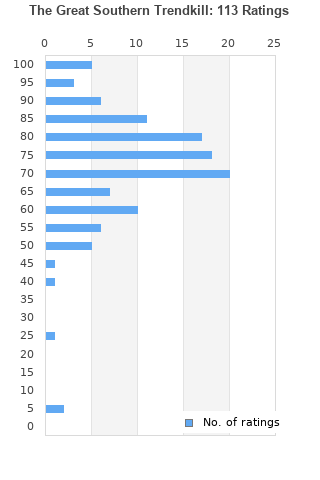 The Great Southern Trendkill is ranked 4th best out of 12 albums by Pantera on BestEverAlbums.com.

The best album by Pantera is Vulgar Display Of Power which is ranked number 977 in the list of all-time albums with a total rank score of 1,895. 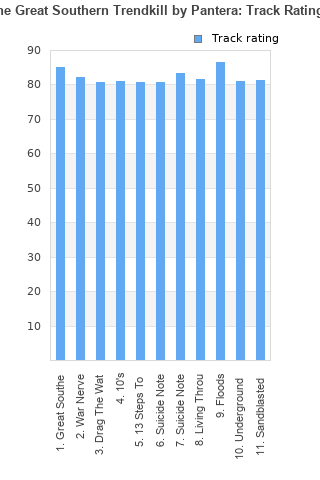 Rating metrics: Outliers can be removed when calculating a mean average to dampen the effects of ratings outside the normal distribution. This figure is provided as the trimmed mean. A high standard deviation can be legitimate, but can sometimes indicate 'gaming' is occurring. Consider a simplified example* of an item receiving ratings of 100, 50, & 0. The mean average rating would be 50. However, ratings of 55, 50 & 45 could also result in the same average. The second average might be more trusted because there is more consensus around a particular rating (a lower deviation).
(*In practice, some albums can have several thousand ratings)
This album has a Bayesian average rating of 73.8/100, a mean average of 72.6/100, and a trimmed mean (excluding outliers) of 73.9/100. The standard deviation for this album is 16.7.

The one Pantera album I can consistently sit all the way through, and the only one besides Vulgar Display of Power that has no duds. If anyone knows one song from The Great Southern Trendkill, it's Floods, but the title track is massive, Drag the Waters is an absolute jam, and the two part Suicide Note is a rollercoaster.

Awesome album that gets better as it goes along. The last 2 songs are my favorites.

Extreme and violent, a bit experimental. The best thing about that album is it doesn't sound forced or silly with its aggression some metal bands tent to do.

Probably got to be the angriest album ever

Your feedback for The Great Southern Trendkill