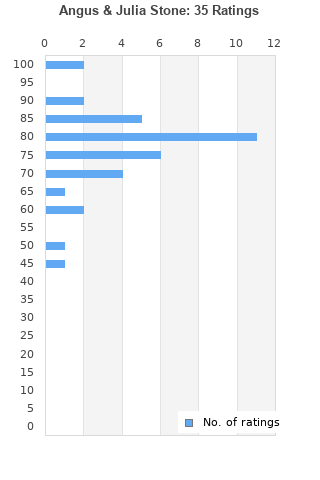 The best album by Angus & Julia Stone is Down The Way which is ranked number 3370 in the list of all-time albums with a total rank score of 431. 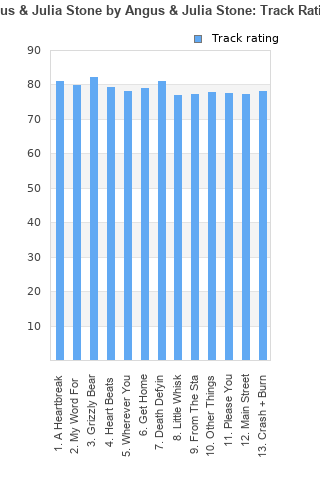 Rating metrics: Outliers can be removed when calculating a mean average to dampen the effects of ratings outside the normal distribution. This figure is provided as the trimmed mean. A high standard deviation can be legitimate, but can sometimes indicate 'gaming' is occurring. Consider a simplified example* of an item receiving ratings of 100, 50, & 0. The mean average rating would be 50. However, ratings of 55, 50 & 45 could also result in the same average. The second average might be more trusted because there is more consensus around a particular rating (a lower deviation).
(*In practice, some albums can have several thousand ratings)
This album is rated in the top 6% of all albums on BestEverAlbums.com. This album has a Bayesian average rating of 76.8/100, a mean average of 78.0/100, and a trimmed mean (excluding outliers) of 78.0/100. The standard deviation for this album is 10.4.

Brother-and-sister duo Angus & Julia Stone haven't made a bad album yet, and that's thanks to their consistently solid songwriting and their genuinely emotional and heartfelt vocal performances. This self-titled album, their third full-length release together, is probably the closest they've done to a full-on rock and roll album. In my estimation the best track here is the slow burner "Crash + Burn," which resonated for me in 2014 in large part because I could, from personal experience, identify with the feeling of watching one's own life crash and burn and feeling entirely helpless to change it. The song, in fact, feels like an anthem to crashing and burning.

The production here is beyond magic. Angus, Julia & Rick worked well together to release this great album.

A solid album that's definitely a bit slicker than their previous releases (perhaps thanks to the Rick Rubin influence), but it's a very consistient, at times very lovely release, though it's slightly turgid structure becomes apparant at the end as it kind of just peters out with some overlong and forgettable mood pieces.

Like this album perhaps hasn't won me over as much as their previous albums. Julia Stone getting a more bluesy voice which is a positive, going forward to more better things

A great album from this Australian siblings. They are renewing little by little the new folk scene. A must-listen album.

Your feedback for Angus & Julia Stone