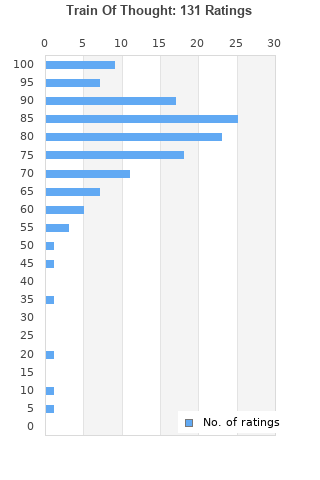 Train Of Thought is ranked 5th best out of 35 albums by Dream Theater on BestEverAlbums.com. 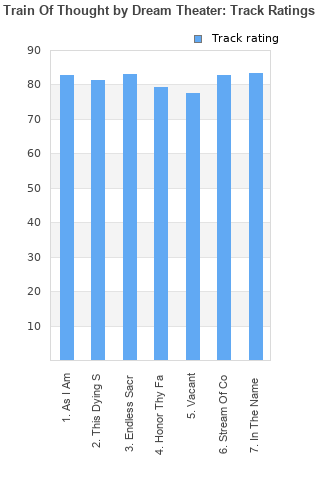 Rating metrics: Outliers can be removed when calculating a mean average to dampen the effects of ratings outside the normal distribution. This figure is provided as the trimmed mean. A high standard deviation can be legitimate, but can sometimes indicate 'gaming' is occurring. Consider a simplified example* of an item receiving ratings of 100, 50, & 0. The mean average rating would be 50. However, ratings of 55, 50 & 45 could also result in the same average. The second average might be more trusted because there is more consensus around a particular rating (a lower deviation).
(*In practice, some albums can have several thousand ratings)
This album is rated in the top 2% of all albums on BestEverAlbums.com. This album has a Bayesian average rating of 78.8/100, a mean average of 77.6/100, and a trimmed mean (excluding outliers) of 79.3/100. The standard deviation for this album is 16.0.

Pretty much the heaviest and most metal sound, that Dream Theater ever produced. A overall great album with some stand-out tracks, even if the band did much better stuff.

Great great Dream Theater album. Not a bad track on the album, not even Vacant, in fact it's a brilliant lead in to arguably the greatest instrumental in their catalog, Stream of Consciousness. In the Name of God is one of the best album closers of all time.

I asked my mom for a Metallica album for my birthday in 3rd grade and this is what I ended up getting. I was pissed until I realized how much more talented Dream Theater was.

If anything, this album is overlooked. If it's overrated, then great! That just means more people will be listening to this album. It may not be as original as "Metropolis Pt. 2," but there are plenty of amazing tracks overall.

I think this baby is a little too overrated. It's probably one of my least favorite DT albums. Sure, it's heavy and powerful, but it's also far too overlong and cliche. Sometimes I wonder if this is what St. Anger should've been - DT certainly sound too much like Metallica here. Highlights: the eclectic and driving instrumental, Stream of Consciousness; the majestic closer, In the Name of God; and the energetic prog-jam powerhouse, Endless Sacrifice.

Your feedback for Train Of Thought