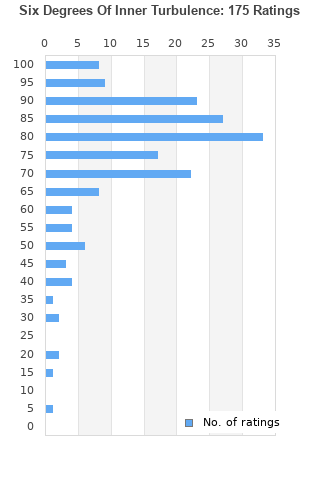 Six Degrees Of Inner Turbulence is ranked 3rd best out of 35 albums by Dream Theater on BestEverAlbums.com.

Listen to Six Degrees Of Inner Turbulence on YouTube 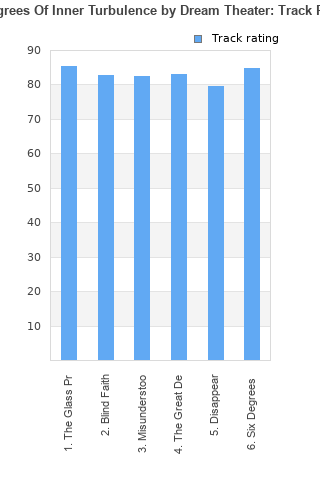 0
6.
Six Degrees Of Inner Turbulence: I. Overture II. About To Crash III. War Inside My Head IV. The Test That Stumped Them All V. Goodnight Kiss VI. Solitary Shell VII. About To Crash (Reprise) VIII. Losing Time/Grand Finale
Rating: 83 (13 votes)Comments:

Rating metrics: Outliers can be removed when calculating a mean average to dampen the effects of ratings outside the normal distribution. This figure is provided as the trimmed mean. A high standard deviation can be legitimate, but can sometimes indicate 'gaming' is occurring. Consider a simplified example* of an item receiving ratings of 100, 50, & 0. The mean average rating would be 50. However, ratings of 55, 50 & 45 could also result in the same average. The second average might be more trusted because there is more consensus around a particular rating (a lower deviation).
(*In practice, some albums can have several thousand ratings)
This album is rated in the top 5% of all albums on BestEverAlbums.com. This album has a Bayesian average rating of 76.8/100, a mean average of 75.5/100, and a trimmed mean (excluding outliers) of 77.0/100. The standard deviation for this album is 17.5.

Aside of Metropolis Pt.2, which is like my favorite album, Six Degrees was special in that it centered a whole huge 40 minutes around one topic to flesh it out enough to work. Main problem is the disappointing middle part, which isn´t bad, just unmemorable in comparison. Opening track is kickass.

Dream Theater at their best.
The first disc is a faultless attempt going from the heavy start - The Glass Prison - to the prog success - Blind Faith, The Great Debate.
The second CD is a little weaker to me. But a 42 minutes-lasting song cannot be perfect from start to end, of course. The Test that Stumpted Them All is its best moment, I think.
In the End, Six Degrees of Inner Turbulence is an ambitious work, and the band didn't release such a developped album since this one.

It's mostly average Dream Theater fare (which I consider to be a cut above the norm so that's fine with me).

The lead track is balls-to-the-wall, and the second disk is a 40-minute epic. Can't go wrong there. The album has typical Dream Theater dynamics - plenty of ballads mixed in with the heaviness.

Each song has its moments: The Glass Prison has that killer riff, Blind Faith has a beautiful instrumental breakdown, and Misunderstood has some nice melodies. However, the songs do tend to meander a bit. The Great Debate doesn't need to be 14 minutes long; it would be fine at 6. Disappear, likewise, should be a simple 3-minute song.

Ironically, the 40-minute centerpiece is the least bloated of the bunch! It's 8 movements long, and the only piece that might overstay its welcome is the overture.

Your feedback for Six Degrees Of Inner Turbulence