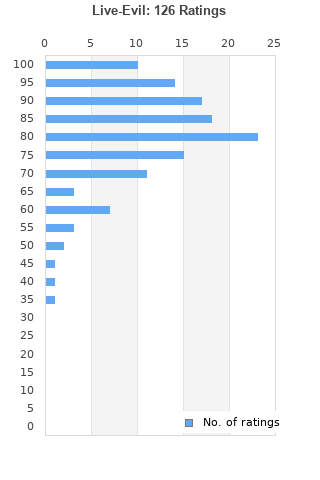 Live-Evil is ranked 13th best out of 111 albums by Miles Davis on BestEverAlbums.com.

The best album by Miles Davis is Kind Of Blue which is ranked number 40 in the list of all-time albums with a total rank score of 28,711. 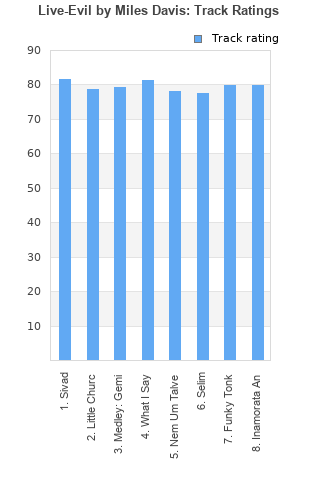 Rating metrics: Outliers can be removed when calculating a mean average to dampen the effects of ratings outside the normal distribution. This figure is provided as the trimmed mean. A high standard deviation can be legitimate, but can sometimes indicate 'gaming' is occurring. Consider a simplified example* of an item receiving ratings of 100, 50, & 0. The mean average rating would be 50. However, ratings of 55, 50 & 45 could also result in the same average. The second average might be more trusted because there is more consensus around a particular rating (a lower deviation).
(*In practice, some albums can have several thousand ratings)
This album is rated in the top 1% of all albums on BestEverAlbums.com. This album has a Bayesian average rating of 80.9/100, a mean average of 80.9/100, and a trimmed mean (excluding outliers) of 81.6/100. The standard deviation for this album is 13.2.

Live-Evil is a great mixture of jazz and funk that he would later go on to perfect on On the Corner. This record is one of the best jazz fusion recordings ever, though, and should be a must for anyone who plays or listens to jazz music.

A great amalgamation of Live and Studio recordings. I personally prefer the live selections on this album over the more sedate studio work. Miles plugs his horn through a wah-wah (I don't know if this is the correct technical term) amplifier and let's rip on the live cuts. I particularly lit up for "Sivad" and "Funky Tonk".

Live-Evil consists of four long jams recorded live, with four nice short moody tracks, recorded in studio, in between. A small negative for me would be that the long tracks sound very much alike. If someone played a small snippet of one of the four pieces and asked me which one it is, I would have no idea. The same can not be said about the 5 long pieces on Bitches Brew, which all seem to have their own theme and sound. I guess the live songs on Live-Evil were just improvised live, so they didn't really have any plan for any of the songs originally? And 86 minutes of this jamming can honestly get a bit tiring after some time. But I still always appreciate me some good jams from Miles and his band, and I think they do a great job on this LP too. The shorter studio tracks seem more planned out and work well as nice little moody breaks between the bigger tracks. Overall Live-Evil is yet another great LP from Miles. Nothing else to say about it really.