The Balcony (studio album) by Catfish And The Bottlemen 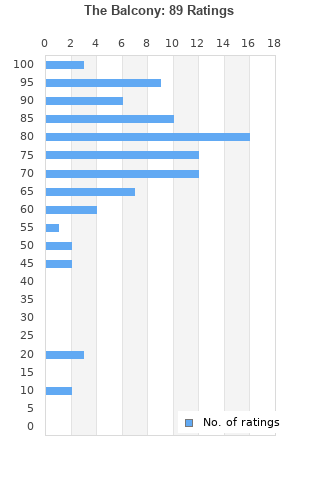 Catfish and the Bottlemen The Balcony (Vinyl) 12" Album
Condition: New
$35.19

Catfish And The Bottlemen bestography

The Balcony is ranked as the best album by Catfish And The Bottlemen. 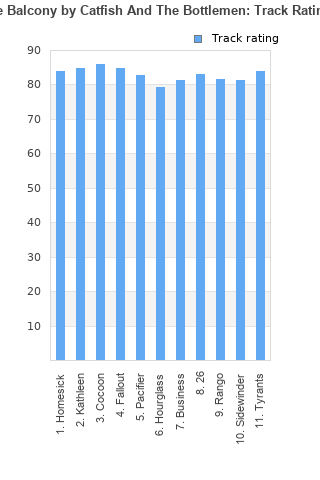 Rating metrics: Outliers can be removed when calculating a mean average to dampen the effects of ratings outside the normal distribution. This figure is provided as the trimmed mean. A high standard deviation can be legitimate, but can sometimes indicate 'gaming' is occurring. Consider a simplified example* of an item receiving ratings of 100, 50, & 0. The mean average rating would be 50. However, ratings of 55, 50 & 45 could also result in the same average. The second average might be more trusted because there is more consensus around a particular rating (a lower deviation).
(*In practice, some albums can have several thousand ratings)
This album is rated in the top 13% of all albums on BestEverAlbums.com. This album has a Bayesian average rating of 75.0/100, a mean average of 73.7/100, and a trimmed mean (excluding outliers) of 75.2/100. The standard deviation for this album is 18.9.

Generic, soulless pop rock capitalising on the likes of Arctic Monkeys and The Strokes. It’s listenable and competent but you won’t find much in the way of rawness and once you’ve heard the first track you’ll know how they’re all gonna sound, no curve balls in sight.

It isn't really innovative, but it's consistent, I can't find a bad song here. While it hasn't got the grip of an Arctic Monkeys record, you can definitely hear the ambition and talent of these young lads. The production is spot on, it is full of bangers, and you can hear some Strokes and Oasis influence too. Songs like Tyrants or Cocoon show their incredible potential as songwriters.

Good album, I hope the next is muuuuuuuch better.

Your feedback for The Balcony