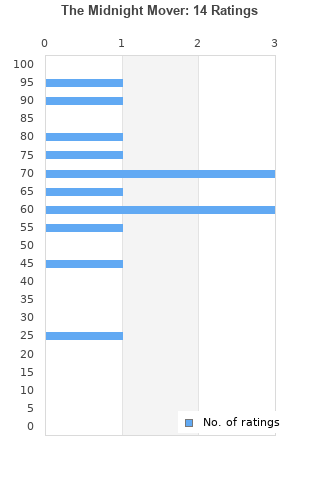 The Midnight Mover is ranked 8th best out of 18 albums by Wilson Pickett on BestEverAlbums.com.

The best album by Wilson Pickett is The Exciting Wilson Pickett which is ranked number 4544 in the list of all-time albums with a total rank score of 301. 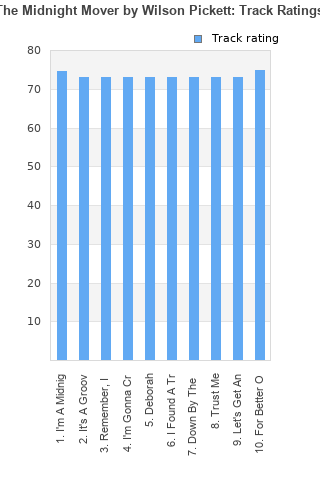 Rating metrics: Outliers can be removed when calculating a mean average to dampen the effects of ratings outside the normal distribution. This figure is provided as the trimmed mean. A high standard deviation can be legitimate, but can sometimes indicate 'gaming' is occurring. Consider a simplified example* of an item receiving ratings of 100, 50, & 0. The mean average rating would be 50. However, ratings of 55, 50 & 45 could also result in the same average. The second average might be more trusted because there is more consensus around a particular rating (a lower deviation).
(*In practice, some albums can have several thousand ratings)
This album has a Bayesian average rating of 68.7/100, a mean average of 65.7/100, and a trimmed mean (excluding outliers) of 65.7/100. The standard deviation for this album is 17.1.

This album is uneven. It includes I'm Gonna Cry, which was recorded and released as a single in 1964, and its backing track For Better Or Worse; they're out of place here in 1968. And of course, there's Deborah, a strange track that morphs between a soul-stomp and a fado-sounding ballad that he sings in Italian, with an elaborate arrangement, very sophisticated I'm sure. Thing is, those tracks are sort of great in their big, bombastic way. And this album has Wilson Pickett singing with Bobby Womack on backing vocals, which totally works. Depending how you feel about the ballads (they're great, but if you come for soul stomping, ballads can get in the way sometimes) and the 1964 stuff, it's a pretty fun ride.

Your feedback for The Midnight Mover