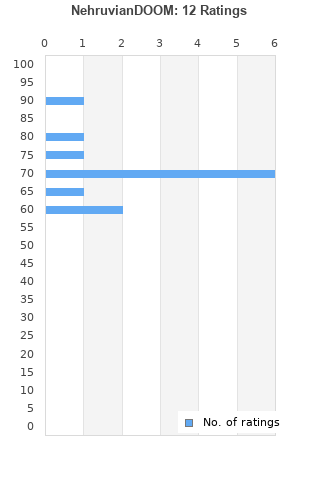 NehruvianDOOM - NehruvianDOOM [CD]
Condition: Brand New
Time left: 5d 12h 55m 20s
Ships to: Worldwide
£9.98
Go to store
Product prices and availability are accurate as of the date indicated and are subject to change. Any price and availability information displayed on the linked website at the time of purchase will apply to the purchase of this product.  See full search results on eBay 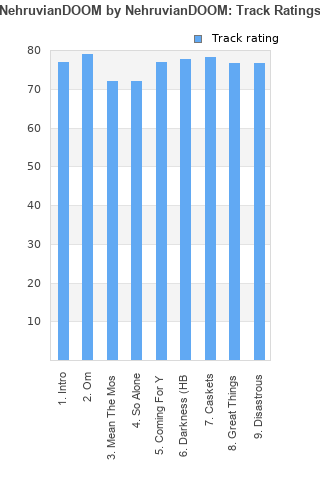 Rating metrics: Outliers can be removed when calculating a mean average to dampen the effects of ratings outside the normal distribution. This figure is provided as the trimmed mean. A high standard deviation can be legitimate, but can sometimes indicate 'gaming' is occurring. Consider a simplified example* of an item receiving ratings of 100, 50, & 0. The mean average rating would be 50. However, ratings of 55, 50 & 45 could also result in the same average. The second average might be more trusted because there is more consensus around a particular rating (a lower deviation).
(*In practice, some albums can have several thousand ratings)
This album has a Bayesian average rating of 69.9/100, a mean average of 67.3/100, and a trimmed mean (excluding outliers) of 67.3/100. The standard deviation for this album is 11.4.

For his latest project DOOM decides to team up with the young up-and-coming MC Bishop Nehru. What exactly he sees in Bishop, IDK. I personally can't take his voice, and it gets especially bad when he tries to sing in the hooks. You have to like Bishop to really dig this project, as he's the one mainly behind the mic. DOOM mostly stays behind the mixing board. I can't put all the blame of this album's low quality on Bishop either. DOOM's production isn't exactly very exciting. I mean, you could at least gave the boy some good beats to rap over, but DOOM really ain't that much of a creative force anymore. There are some alright tracks on here: The opener, "Om" is enjoyable enough, with DOOM joining in too. Out of the tracks where only Bishop is behind the mic, "Darkness (HBU)" stood out as being pretty decent. I can't stand tracks like "Mean the Most" and "So Alone" though, mostly because of their shitty hooks. Definitely my least favourite DOOM project.