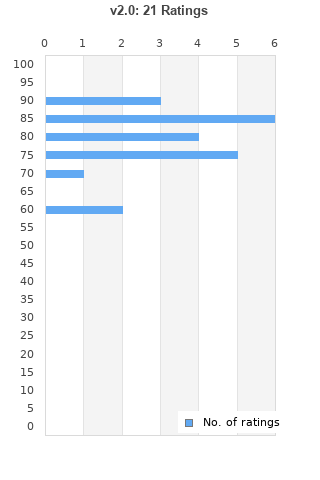 v2.0 is ranked 2nd best out of 6 albums by GoGo Penguin on BestEverAlbums.com.

The best album by GoGo Penguin is A Humdrum Star which is ranked number 9289 in the list of all-time albums with a total rank score of 123. 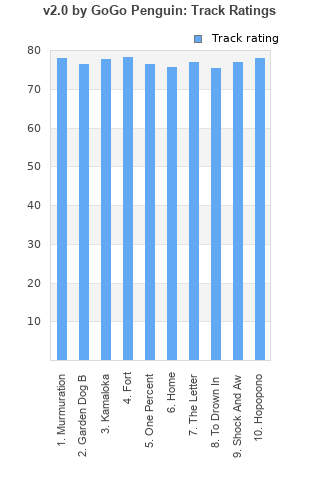 Rating metrics: Outliers can be removed when calculating a mean average to dampen the effects of ratings outside the normal distribution. This figure is provided as the trimmed mean. A high standard deviation can be legitimate, but can sometimes indicate 'gaming' is occurring. Consider a simplified example* of an item receiving ratings of 100, 50, & 0. The mean average rating would be 50. However, ratings of 55, 50 & 45 could also result in the same average. The second average might be more trusted because there is more consensus around a particular rating (a lower deviation).
(*In practice, some albums can have several thousand ratings)
This album is rated in the top 6% of all albums on BestEverAlbums.com. This album has a Bayesian average rating of 76.9/100, a mean average of 79.3/100, and a trimmed mean (excluding outliers) of 79.3/100. The standard deviation for this album is 7.7.

Their musicality is so great. Three guys working in harmony.

an awesome fusion of jazz, post-rock, and even math/prog rock tendencies. I also love the bass on this album. Good upright bass is hard to come by these days. And the production is magnificent.

In a sense, the album is an electronic album, played acoustically. The similarities to the work of people like Aphex Twin is actually quite apparent. The instruments are used largely in the same way an electronic artist would use their electronic counterparts.

Incorporating many influences from a wide variety of genres, GoGo Penguin come out with a melodic, romantic and chilling sophomore album, which is to me their best effort

Your feedback for v2.0