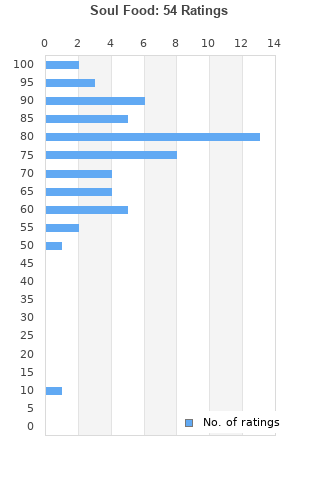 GOODIE MOB - SOUL FOOD / REMIX / GOODIE BAG (12") 1996!! RARE!! CEE-LO GREEN
Condition: Used
Time left: 2d 12h 28m 56s
Ships to: Worldwide
$49.99
Go to store
Product prices and availability are accurate as of the date indicated and are subject to change. Any price and availability information displayed on the linked website at the time of purchase will apply to the purchase of this product.  See full search results on eBay

Soul Food is ranked as the best album by Goodie Mob. 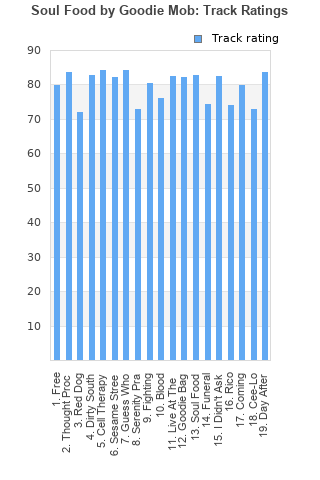 Rating metrics: Outliers can be removed when calculating a mean average to dampen the effects of ratings outside the normal distribution. This figure is provided as the trimmed mean. A high standard deviation can be legitimate, but can sometimes indicate 'gaming' is occurring. Consider a simplified example* of an item receiving ratings of 100, 50, & 0. The mean average rating would be 50. However, ratings of 55, 50 & 45 could also result in the same average. The second average might be more trusted because there is more consensus around a particular rating (a lower deviation).
(*In practice, some albums can have several thousand ratings)
This album is rated in the top 5% of all albums on BestEverAlbums.com. This album has a Bayesian average rating of 77.2/100, a mean average of 76.7/100, and a trimmed mean (excluding outliers) of 78.1/100. The standard deviation for this album is 15.4.

It has a track named Dirty South, so you know what to expect right off the bat. The instrumentation gives it a brighter and filled with soul tone that forms a nice contrast with the darker themes being explored by the lyrics ("See never did I think when I got grown That some pee wee sacks had been done took this town See, life's a bitch, then you figure out Why you really got dropped in the Dirty South See in the 3rd grade this is what you told You was bought, you was sold Now they sayin' Juice left some heads cracked I betcha Jed Clampett want his money back"). CeeLo Green is the man when it comes to rapping and overall mic presence ("But take yo time, guess who's the inspiration for the rhyme... My Moma"), but everyone has a meaningful -even if it may not be that memorable- contribution.

This album is just another proof that people here dont know how to actually listen and properly rate. Hip hop gets too much hate for dumb ass reasons. This is a southern under rated classic. Funky and conscious.

Cee Lo steals the show. Easily the best performances of his entire career.

What an incredible album. Every song is great. Hip hop & overall music classic.

Your feedback for Soul Food