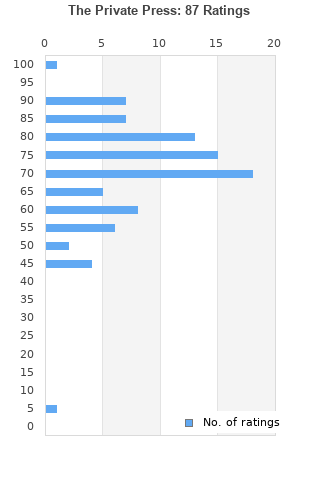 DJ SHADOW "The Private Press" Limited Edition 2 CD Digipak Special Packaging EX
Condition: Very Good
Time left: 1d 4h 5m 43s
Ships to: Worldwide
$9.65
Go to store
Product prices and availability are accurate as of the date indicated and are subject to change. Any price and availability information displayed on the linked website at the time of purchase will apply to the purchase of this product.  See full search results on eBay

The Private Press is ranked 2nd best out of 11 albums by DJ Shadow on BestEverAlbums.com.

The best album by DJ Shadow is Endtroducing..... which is ranked number 140 in the list of all-time albums with a total rank score of 12,705. 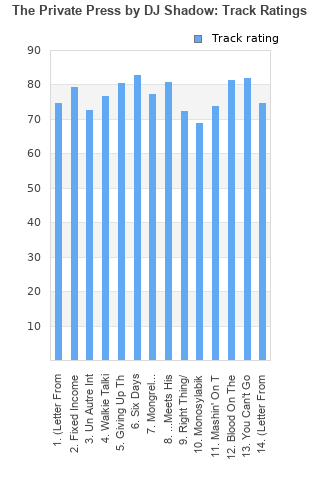 Rating metrics: Outliers can be removed when calculating a mean average to dampen the effects of ratings outside the normal distribution. This figure is provided as the trimmed mean. A high standard deviation can be legitimate, but can sometimes indicate 'gaming' is occurring. Consider a simplified example* of an item receiving ratings of 100, 50, & 0. The mean average rating would be 50. However, ratings of 55, 50 & 45 could also result in the same average. The second average might be more trusted because there is more consensus around a particular rating (a lower deviation).
(*In practice, some albums can have several thousand ratings)
This album has a mean average rating of 71.0/100. The trimmed mean (excluding outliers) is 71.6/100. The standard deviation for this album is 13.9.

Such an impressive album. Was bought for me as a birthday present a few weeks ago and it's been on the deck ever since. Will undoubtedly become a firm favourite.

Not quite as good as it's predecessor, it falls short of being perfect, due to a couple unnecessary tracks, so it isn't as consistent, but still, a respectable follow-up album.

I spent a lot of time with this record for a few years after it came out and I'm still impressed by the beauty of it. This guy is a magician of sound design with a really sensitive ear.

Not as good as endtroducing... but it's still a great record Six Days and Blood on the Motorway are amazing

One of those records that falls victim of always being overshadowed (see what I did there?) by the preceding album which is an all time classic. Very good though it is.

Your feedback for The Private Press