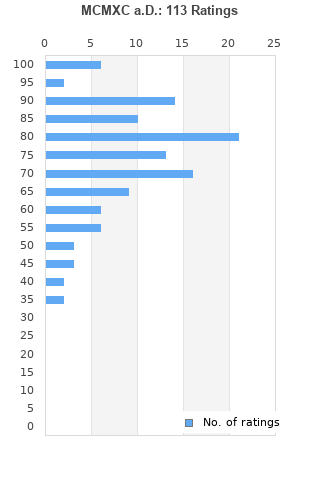 ENIGMA first CD album MCMXC AD hits SADENESS Part 1 Mea Culpa Principles of Lust
Condition: Like New
Time left: 1d 17h 28m 37s
Ships to: Worldwide
$14.99
Go to store
Product prices and availability are accurate as of the date indicated and are subject to change. Any price and availability information displayed on the linked website at the time of purchase will apply to the purchase of this product.  See full search results on eBay

MCMXC a.D. is ranked as the best album by Enigma. 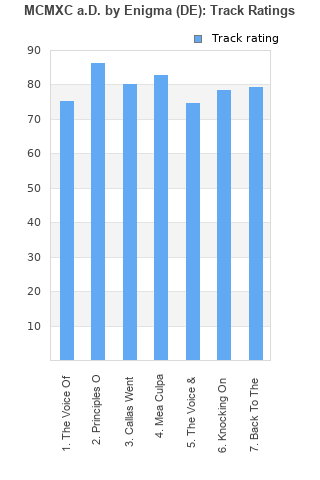 Rating metrics: Outliers can be removed when calculating a mean average to dampen the effects of ratings outside the normal distribution. This figure is provided as the trimmed mean. A high standard deviation can be legitimate, but can sometimes indicate 'gaming' is occurring. Consider a simplified example* of an item receiving ratings of 100, 50, & 0. The mean average rating would be 50. However, ratings of 55, 50 & 45 could also result in the same average. The second average might be more trusted because there is more consensus around a particular rating (a lower deviation).
(*In practice, some albums can have several thousand ratings)
This album has a Bayesian average rating of 74.1/100, a mean average of 74.1/100, and a trimmed mean (excluding outliers) of 74.1/100. The standard deviation for this album is 14.7.

Top of the tops

MCMXC a.D starts out striking with its whispers and Gregorian chants but never pushes itself beyond the opening ideas.

This isn't fair. This is just beautiful.

Very good new-age/ambient house/downtempo/synthpop chillout album. I can't rate it based on rating single tracks. This album is an interrelated artwork. Overall very good 90/100. I recommend the Limited Edition including 4 additional remixes. Favourite!

thanks for your comments. i only have their best of which I love. been looking for their best album - i belive this to be it??

A delightfully weird album that combines Gregorian Chant, whispered French, and some weird kind of flute that sounds like a duck-dog.

My favorite album of all time! It was ground-breaking, futuristic, and epic. Both the rhythm and the melody are hooky.

Your feedback for MCMXC a.D.