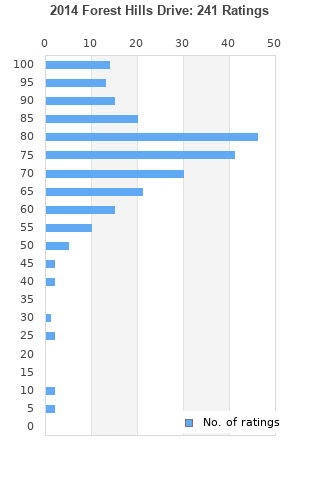 12" Picture Disc J. Cole 2014 Forest Hills Drive 2019 Columbia RSD 19075978341
Condition: New
Time left: 8h 55m 11s
Ships to: Worldwide
$30.00
Go to store
Product prices and availability are accurate as of the date indicated and are subject to change. Any price and availability information displayed on the linked website at the time of purchase will apply to the purchase of this product.  See full search results on eBay

2014 Forest Hills Drive is ranked as the best album by J. Cole. 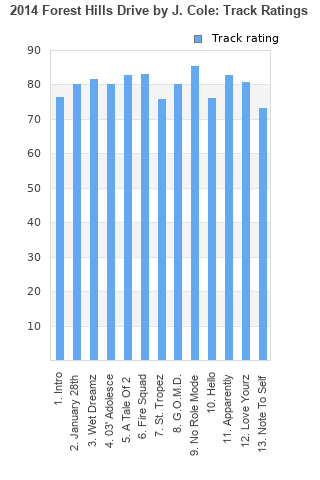 Rating metrics: Outliers can be removed when calculating a mean average to dampen the effects of ratings outside the normal distribution. This figure is provided as the trimmed mean. A high standard deviation can be legitimate, but can sometimes indicate 'gaming' is occurring. Consider a simplified example* of an item receiving ratings of 100, 50, & 0. The mean average rating would be 50. However, ratings of 55, 50 & 45 could also result in the same average. The second average might be more trusted because there is more consensus around a particular rating (a lower deviation).
(*In practice, some albums can have several thousand ratings)
This album is rated in the top 10% of all albums on BestEverAlbums.com. This album has a Bayesian average rating of 75.7/100, a mean average of 74.1/100, and a trimmed mean (excluding outliers) of 75.8/100. The standard deviation for this album is 16.3.

Gets a lot of hate, doesn't have the deepest lyrics, doesn't have the most innovative production.
But what it does it does perfectly, melodic conscious rap that sounds as good as it can possibly sound, lyrics that anyone can relate with and music that anybody can vibe to. Perfect at what it sets out to do.

2014 Forest Hills Drive starts slow but as the album progresses the tone and the production really pick up. G.O.M.D in particular has a fantastic use of sampling. Cole has some good bars but often falls into weak rhyme schemes (A Tale Of 2 Citiez). Luckly, J. Cole's enthusiasm lifts the album through its difficult parts.

First 4-5 tracks are very good but it gets a little bit less interesting as it goes towards the end. Still a great album

Double platinum with no features

Fun album musically. Would be 100/100 if he only displayed more performance talent.

Enjoyable, for sure. Some really cool cuts on this. The use of orchestral instrumentation on this really gives it an emotional contrast. He is a very talented lyricist, which makes it consistently interesting to listen to. There are several tracks I could do without, they seem to serve no purpose but just to make it overlong. But other than that, a nice listen.

It's a shame that people keep rating this a 5/100 to try and lower the overall score. This is a solid album, and one of the best rap albums in the past few years.

Your feedback for 2014 Forest Hills Drive