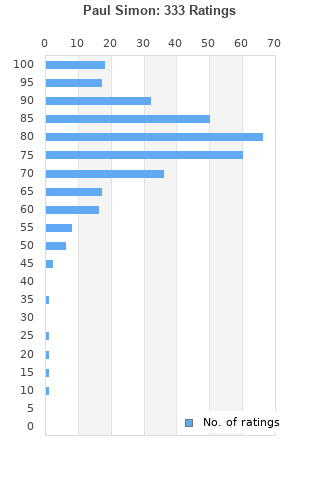 You're The One Paul Simon
Condition: Good
$4.99

Paul Simon is ranked 2nd best out of 26 albums by Paul Simon on BestEverAlbums.com.

The best album by Paul Simon is Graceland which is ranked number 129 in the list of all-time albums with a total rank score of 12,976. 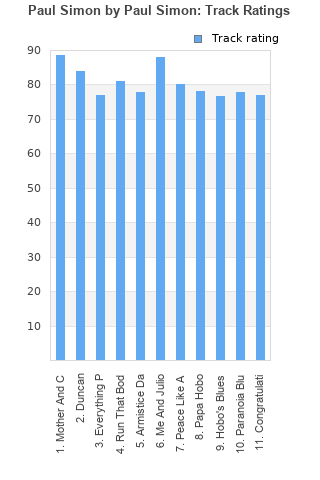 Me And Julio Down By The Schoolyard
Rating: 88 (127 votes)Comments:

Rating metrics: Outliers can be removed when calculating a mean average to dampen the effects of ratings outside the normal distribution. This figure is provided as the trimmed mean. A high standard deviation can be legitimate, but can sometimes indicate 'gaming' is occurring. Consider a simplified example* of an item receiving ratings of 100, 50, & 0. The mean average rating would be 50. However, ratings of 55, 50 & 45 could also result in the same average. The second average might be more trusted because there is more consensus around a particular rating (a lower deviation).
(*In practice, some albums can have several thousand ratings)
This album is rated in the top 2% of all albums on BestEverAlbums.com. This album has a Bayesian average rating of 78.6/100, a mean average of 77.9/100, and a trimmed mean (excluding outliers) of 78.8/100. The standard deviation for this album is 13.4.

I was pretty lukewarm on this album upon first hearing it. But, man, as I’ve returned to it a couple times over I really find myself enjoying it. All sorts of good stuff here from undeniably grooving full band arrangements to solemn and intimate acoustic trance pieces.

A great album from one of the great musicians of all time. This is perfect for moody days and sitting on the porch during the golden hour.
Many songs that should be heard on radios more often
Like: Duncan, Run That Body Down, Armistice Day

A recommended listen to all.

The doctor asking "How long you think that you can
Run that body down?" is the moment when it hits me. For me, Simon is musing on life, the inevitability of its ending and our constant unawareness of our own demise.
It takes quite a bit of work to not break down at that line.

Paul S solo carreer starts at a subdued, relaxing and thoughtful album that made clear that he could go on without garfunkel.

rather random musings with 2 blockbusters

Sure Simon would go on to make better, more rounded albums but this ones important for setting him onto the pathway to greatness

First half is wonderful. Second half forgettable.

The best tracks are just so good that I'm willing to allow for some less memorable flights of fancy.

Amazing album, I don't know why most people only know "Me and Julio" when there is so many other great songs on here. Why does nobody talk about "Armistice Day" as well, my favourite Paul Simon song, his guitar playing is amazing

Your feedback for Paul Simon