The Fillmore Concerts (live album) by The Allman Brothers Band 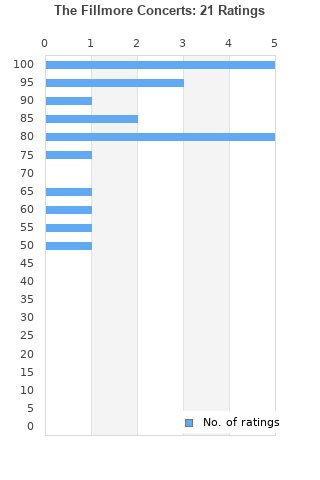 Allman Brothers Band - The Fillmore Concerts - 1992 Polydor 2CD - Buy It Now!
Condition: Very Good
Time left: 1d 18h 15m 55s
Ships to: Worldwide
$10.00
Go to store
Product prices and availability are accurate as of the date indicated and are subject to change. Any price and availability information displayed on the linked website at the time of purchase will apply to the purchase of this product.  See full search results on eBay

The Fillmore Concerts is ranked 6th best out of 50 albums by The Allman Brothers Band on BestEverAlbums.com.

The best album by The Allman Brothers Band is At Fillmore East which is ranked number 385 in the list of all-time albums with a total rank score of 5,085. 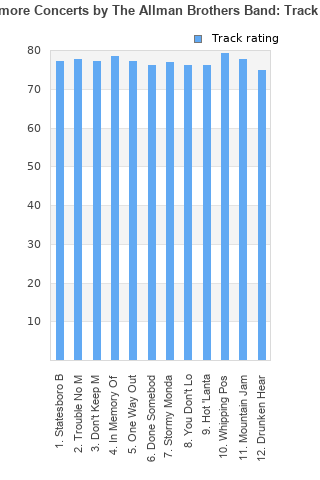 Rating metrics: Outliers can be removed when calculating a mean average to dampen the effects of ratings outside the normal distribution. This figure is provided as the trimmed mean. A high standard deviation can be legitimate, but can sometimes indicate 'gaming' is occurring. Consider a simplified example* of an item receiving ratings of 100, 50, & 0. The mean average rating would be 50. However, ratings of 55, 50 & 45 could also result in the same average. The second average might be more trusted because there is more consensus around a particular rating (a lower deviation).
(*In practice, some albums can have several thousand ratings)
This album is rated in the top 2% of all albums on BestEverAlbums.com. This album has a Bayesian average rating of 79.1/100, a mean average of 82.8/100, and a trimmed mean (excluding outliers) of 82.8/100. The standard deviation for this album is 15.5.

This album belongs to my personal Album top 100 which you can check out. I chose this album because the Allmann Brother Band are all about live performance and this is their quintessential live album because of the general bluesy/Jazzy atmosphere: especially the long and winding jamming tracks like Mountain Jam and especially Whipping Post are outstanding.
On the other hand it doesn't contain some of my favorite tracks like Jessica.

With this release they took the Fillmore East recordings added the songs from Eat a Peach recorded at the same shows plus two unreleased tracks, digitally remastered them all, and sequenced them to flow like one long show. The sound is great and the show is spectacular. In some ways I actually prefer it to the original Fillmore East record.

Your feedback for The Fillmore Concerts