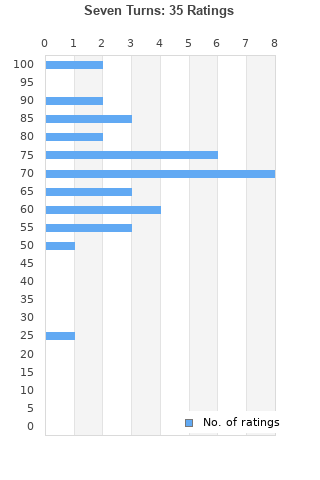 ALLMAN BROTHERS BAND-SEVEN TURNS (GATE) (LTD) (OGV) VINYL LP NEW
Condition: New
Time left: 12h 10m 32s
Ships to: Worldwide
$50.46
Go to store
Product prices and availability are accurate as of the date indicated and are subject to change. Any price and availability information displayed on the linked website at the time of purchase will apply to the purchase of this product.  See full search results on eBay

Seven Turns is ranked 16th best out of 50 albums by The Allman Brothers Band on BestEverAlbums.com.

The best album by The Allman Brothers Band is At Fillmore East which is ranked number 385 in the list of all-time albums with a total rank score of 5,088. 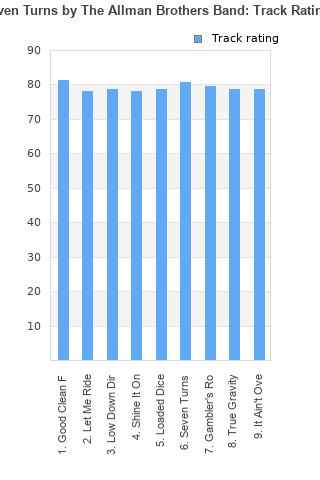 Rating metrics: Outliers can be removed when calculating a mean average to dampen the effects of ratings outside the normal distribution. This figure is provided as the trimmed mean. A high standard deviation can be legitimate, but can sometimes indicate 'gaming' is occurring. Consider a simplified example* of an item receiving ratings of 100, 50, & 0. The mean average rating would be 50. However, ratings of 55, 50 & 45 could also result in the same average. The second average might be more trusted because there is more consensus around a particular rating (a lower deviation).
(*In practice, some albums can have several thousand ratings)
This album has a Bayesian average rating of 72.9/100, a mean average of 71.3/100, and a trimmed mean (excluding outliers) of 72.8/100. The standard deviation for this album is 15.0.

What a welcome surprise. I didn’t even know that this album existed and now I’m so glad that I do. This is a really nice Southern blues rock album with the Allman’s trademark guitar licks running rampant through this. There really some nice guitar work on songs like “Shine It On” and Low Down Dirty Mean.” For me, however, the real standout tracks are “Good Clean Fun” and “Loaded Dice.” The former is a really nice way to start an album (and makes a strong case for inclusion in my favorite first tracks of 1990); and the latter is a gritty little rock and roll song. The album does get a bit too country for my tastes on the title track, but otherwise, this is a very strong effort.

The Allman Brothers Band has released many excellent albums in the 70´s, but this album is special to me. The band entered in the 90´s reformulated with the sensational Warren Haynes on guitar and vocals and with the old and good help of the renowned producer Tom Dowd on the new album. SEVEN TURNS contains my two favorite songs from the band: "Good Clean Fun" and the title track "Seven Turns". The jazzy instrumental "True Gravity" with almost eight minutes (where the Dickey Betts guitar are not so cloying and annoying as some of the long songs from the band in the 70´s) and the great blues "Low Down Dirty Mean" with it´s variations of moods and rhythms also noteworthy. I love the cover too.

Your feedback for Seven Turns