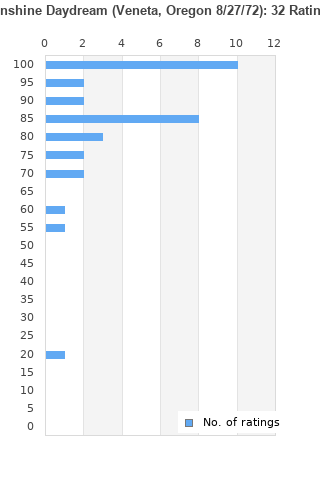 Grateful Dead: Sunshine Daydream Deluxe CD/Blu-ray (Exclusive) #7386
Condition: Like New
Time left: 3d 5h 25m 54s
Ships to: Worldwide
$235.00
Go to store
Product prices and availability are accurate as of the date indicated and are subject to change. Any price and availability information displayed on the linked website at the time of purchase will apply to the purchase of this product.  See full search results on eBay

Sunshine Daydream (Veneta, Oregon 8/27/72) is ranked 13th best out of 155 albums by Grateful Dead on BestEverAlbums.com.

The best album by Grateful Dead is American Beauty which is ranked number 312 in the list of all-time albums with a total rank score of 6,390. 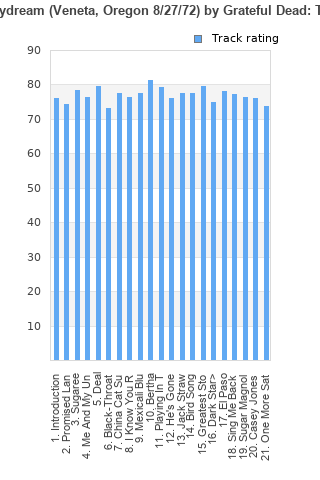 Rating metrics: Outliers can be removed when calculating a mean average to dampen the effects of ratings outside the normal distribution. This figure is provided as the trimmed mean. A high standard deviation can be legitimate, but can sometimes indicate 'gaming' is occurring. Consider a simplified example* of an item receiving ratings of 100, 50, & 0. The mean average rating would be 50. However, ratings of 55, 50 & 45 could also result in the same average. The second average might be more trusted because there is more consensus around a particular rating (a lower deviation).
(*In practice, some albums can have several thousand ratings)
This album is rated in the top 1% of all albums on BestEverAlbums.com. This album has a Bayesian average rating of 82.0/100, a mean average of 82.8/100, and a trimmed mean (excluding outliers) of 85.4/100. The standard deviation for this album is 21.6.

The dark star from this concert is a truly religious experience. A tital psychedelic masterpiece. The other key tracks are an exploratory playing in the band with a beautiful out there and back performance. There are other must hear tracks. It the third highlight for me is a heart wrenching sing me back home, I get goosebumps just thinking about this beautiful performance. This has long been considered by advanced Grateful Dead tape traders to be the best or among the best concerts they ever played. As we know live was where this band really shined brightest. Exquisite risky amazing improvisational masterpiece. A must listen for any fan of original authentic music.