The E.N.D. (studio album) by The Black Eyed Peas 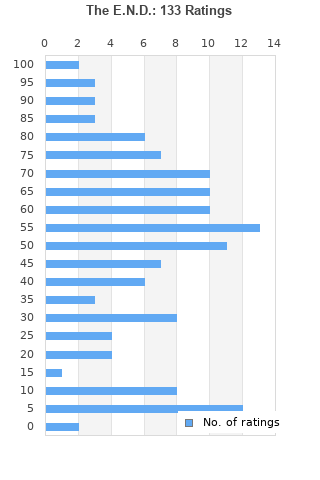 THE BLACK EYED PEAS The End CD ALBUM I Gotta Feeling Boom Boom Pow 16 tracks
Condition: Very Good
Time left: 22h 35m 3s
Ships to: Worldwide
£2.50
Go to store
Product prices and availability are accurate as of the date indicated and are subject to change. Any price and availability information displayed on the linked website at the time of purchase will apply to the purchase of this product.  See full search results on eBay

The E.N.D. is ranked as the best album by The Black Eyed Peas. 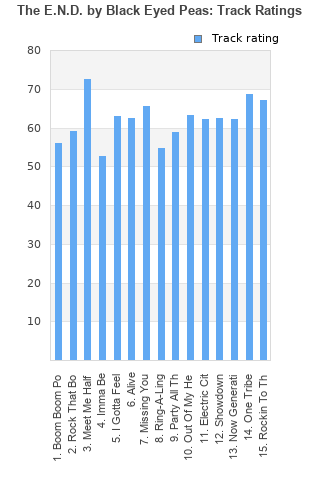 Rating metrics: Outliers can be removed when calculating a mean average to dampen the effects of ratings outside the normal distribution. This figure is provided as the trimmed mean. A high standard deviation can be legitimate, but can sometimes indicate 'gaming' is occurring. Consider a simplified example* of an item receiving ratings of 100, 50, & 0. The mean average rating would be 50. However, ratings of 55, 50 & 45 could also result in the same average. The second average might be more trusted because there is more consensus around a particular rating (a lower deviation).
(*In practice, some albums can have several thousand ratings)
This album has a Bayesian average rating of 50.7/100, a mean average of 48.8/100, and a trimmed mean (excluding outliers) of 48.8/100. The standard deviation for this album is 27.5.

Really good album that gets a lot of hate. Impressivly dynamic, great use of autotune and as for a pop album it's actually complex and creative. If you are a sullen snob without distance to yourself you will be disgusted by tacky lyrics and the sound of computer- generated beats, but this is really far better than people tend to say.

Okay, let me tell you exactly why this is a 9/10.
As I said in my review of Monkey Business: the philosophy in pop is that the goal is enjoyment and that no method to reach that goal should be looked down upon. And while on MB they did that by fucking ripping everyone ever off; on this record they do that by shamelessly grabbing every new instrument and effect within reach without thinking twice about “morality”. If Chuck Berry and Elvis Presley listened to the status quo which said the electric guitar is morally wrong, rock ‘n’ roll never would’ve existed. Twenty years later those rockers did the same by trying to boycott synths, because they forgot the discussion in the ‘50s and ‘60s, or they thought it was just about electric guitars rather than the fact that new is never automatically bad and in the case of music it’s never bad, unless you’re killing random animals and recording it as music. Fast forward another 30 years and the kids that grew up with synthpop are okay with synths, but “hmmm, let’s think about whether auto tune is morally wrong to use... it’s not like history has shown time and time again that you’re just ostracizing people who make actual original and good music”.
A genre is always doomed to regress into elitism in a couple of decades and it will always look like they have valid points, because they pretty much control the status quo at that point.

Culture does what it does, and fact is: culture keeps changing as long as scientific innovation keeps existing, and the government is not actively trying to control culture. And the people who take the initiative of making use of that innovation are the ones that make art, and they will inevitably receive hate from the status quo, and receive love from - as Robert Christgau likes to put it - “just plain people”.

Okay, but the Peas are not the first one to make use of auto tune. We had Cher, but she used it merely as an effect after making the song; daft punk and Kylie Minogue were probably the first to employ it in a way that it shows that they thought about what the effect did and how it could be used best; T-Pain, Lil Wayne and Snoop Dogg used it pretty much only to replace a talk box or because they can’t sing; Uffie was the first to rap to it; Kanye West was the first to make a style of it that is enjoyable enough for a full album (it’s a new genre if you ask me); The Black Eyed Peas were the second to do so. They gave an original spin to it the same way Black Sabbath gave an original spin to Jimi Hendrix’ sound, which is worth a 9/10 in my eyes.

The way they transposed Fergie’s vocals is as rock ‘n’ roll as the way Little Richard screams to introduce a solo and then smashes the same chord for 16 times. Of course, Little Richard had more skills then, but relative to the culture then (jazz was the elite then), what he was doing showed little skill. And the same goes for The Beatles - have you read Quincy Jones’ recent interview? Rock ‘n’ roll was a departure from the focus that jazz had on skill and the focus that classical music had on complexity, and I notice people have forgotten that.

LET THE BEAT ROCK, as simple as that. "Boom Boom Pow" was the first song I really got into ever, and I still do, and no, that's not just because of nostalgia, because when I listen LMFAO, I know very well it is very bad. People need to stop throwing everything that’s pop music on the same pile, there’s a lot of difference between BEP and LMFAO; between Britney’s Blackout and Katy’s Teenage Dream; between Beyoncé’s solo work and Destiny’s Child; between Nicki Minaj and Iggy Azealia. And if you’re confused as to which are the bad ones and which the good, then you have to work on your biases.

Robert Christgau's review of this is perfect btw.

doesnt deserve that much hate, rlly

hahahahaha... so much hate. I've listened to probably 100 worse albums. It's pop music... have you heard a pop record this good? It's pretty rare. The Beginning deserves the hate not The End (by the way that's The Energy Never Dies...).

Anyway I don't this is a masterpiece or anything, but totally not a 10/100... your thinking def leppard and white snake.

From a music production perspective, Will.I.Am's work is pretty impressive. The playing with frequencies all over the place... most hip-hop albums are not as dynamic or have zero dynamic to them like this album does. I dunno... I get the hate, but I also think it's prejudiced.

The title says it all. So let's bury it already.

Bad. Bad beyond belief. Who the hell said they should try being a dance group? WHO?

Not surprising to see such a low rating in a website such as this. The album for itself does not have that much to give, but it does have its catchy songs. Plus, accept it: you all know they will play I Gotta Feeling in 20 years and we will turn the volume up singing along like teen girls while our children hide their faces in embarassement.

A decent late 2000s pop album. Nothing special, but it does what it sets out to do. Which is make catchy, pop, radio friendly tracks. If you are a hipster who jerks off to your vinyl of "In The Aeroplane Over The Sea" every night, you will obviously despise this album. If you are looking for some fun going pop music you can relax and vibe to without having to look for any context or meaning, this is for you.
My favorite tracks: "Meet Me Halfway", "I Gotta Feeling", "Missing You", "Out Of My Head".

Your feedback for The E.N.D.