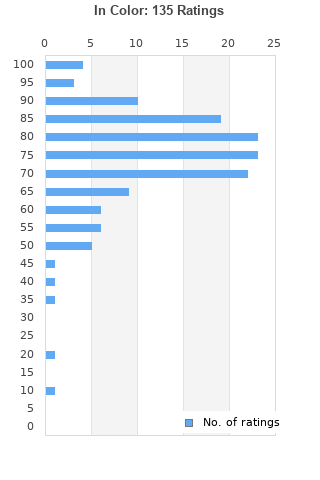 Cheap Trick In Color CD Epic EK 34884 Brand New Factory Sealed!
Condition: Brand New
Time left: 13h 47m 10s
Ships to: Worldwide
$28.99
Go to store
Product prices and availability are accurate as of the date indicated and are subject to change. Any price and availability information displayed on the linked website at the time of purchase will apply to the purchase of this product.  See full search results on eBay

In Color is ranked 3rd best out of 25 albums by Cheap Trick on BestEverAlbums.com.

The best album by Cheap Trick is At Budokan which is ranked number 3321 in the list of all-time albums with a total rank score of 439. 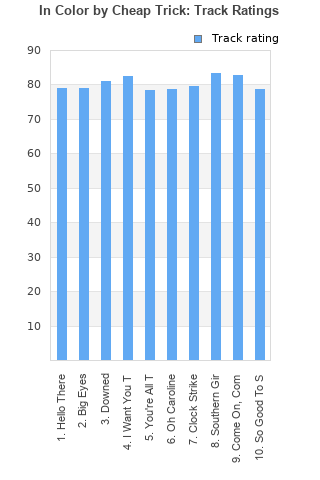 Rating metrics: Outliers can be removed when calculating a mean average to dampen the effects of ratings outside the normal distribution. This figure is provided as the trimmed mean. A high standard deviation can be legitimate, but can sometimes indicate 'gaming' is occurring. Consider a simplified example* of an item receiving ratings of 100, 50, & 0. The mean average rating would be 50. However, ratings of 55, 50 & 45 could also result in the same average. The second average might be more trusted because there is more consensus around a particular rating (a lower deviation).
(*In practice, some albums can have several thousand ratings)
This album is rated in the top 17% of all albums on BestEverAlbums.com. This album has a Bayesian average rating of 75.0/100, a mean average of 74.1/100, and a trimmed mean (excluding outliers) of 75.1/100. The standard deviation for this album is 15.0.

It’s absolutely mind blowing that tracks such as “ Downed” (with the classic lines ‘I’m gonna live on a mountain/ Way down under in Australia/ It’s either that or suicide’ which is eerily similar to lyrics from Bob Dylans “Outlaw Blues” .... ‘Well I wish I was on some Australian mountain range..) , “Southern Girls” and “Come on , Come On” the sweet pop gems they are weren’t a huge commercial success breaking the band on a global scale rather than the Big In Japan Tag

Top tracks:
I Want You To Want Me
Downed
Come On, Come On
Hello There

This gets an 80 from me because of Downed, Southern Girls, Come On, Come On, Big Eyes, and So Good to See You. I could live without the rest of the songs, but I absolutely detest I Want You to Want Me. I hate that song and hate the live version even more.

Best Track: I Want You To Want Me

Cheap Trick has been branded as "too sugary" to be considered true rock'n'roll and to heavy to be pop, so what do you say about "In Color" perhaps the best power-pop release of the 70's?

A polished switch from the rough and raw debut, it is full of well written and produced songs.

"Southern Girls" and "Come On Come On" vault this album into 'classic' status. I could take or leave "I Want You to Want Me".

"In Color" was Cheap Trick's sophomore release. Produced by Tom Werman, who stripped away their raw attack and replace it with a polished , poppy,radio-friendly sound,(in contrast to the first album). "In Color" contains the studio version of "I Want You To Want Me," which would go on to become one of their biggest hits a few years later when it was released on "At Budakon". Hip-shaking, guitar-driven, harmony-coated super-songs make for a rockin' good time. A fantastic record with splendidly crafted songs. Lots of fun.

Solid power pop album although it grows a wee bit stale on side B.

Your feedback for In Color