A Weekend In The City (studio album) by Bloc Party 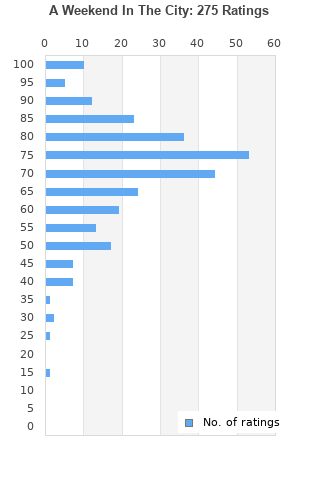 A Weekend In The City is ranked 2nd best out of 11 albums by Bloc Party on BestEverAlbums.com.

The best album by Bloc Party is Silent Alarm which is ranked number 348 in the list of all-time albums with a total rank score of 5,464.

The Head And The Heart - Every Shade of Blue Tour 2022
Ascend Amphitheater, Nashville, United States.

Listen to A Weekend In The City on YouTube 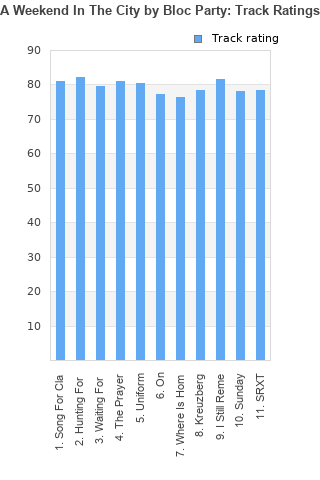 A Weekend In The City rankings

A Weekend In The City collection

A Weekend In The City ratings

Rating metrics: Outliers can be removed when calculating a mean average to dampen the effects of ratings outside the normal distribution. This figure is provided as the trimmed mean. A high standard deviation can be legitimate, but can sometimes indicate 'gaming' is occurring. Consider a simplified example* of an item receiving ratings of 100, 50, & 0. The mean average rating would be 50. However, ratings of 55, 50 & 45 could also result in the same average. The second average might be more trusted because there is more consensus around a particular rating (a lower deviation).
(*In practice, some albums can have several thousand ratings)
This album has a Bayesian average rating of 71.3/100, a mean average of 70.9/100, and a trimmed mean (excluding outliers) of 71.3/100. The standard deviation for this album is 14.8.

A Weekend In The City favourites

A Weekend In The City comments

I've come late to the (Bloc) Party and gave this a listen soon after hearing Silent Alarms in only 2022. I enjoyed this album but not as much as Silent Alarms but really liked The Prayer, On, Where Is Home and Sunday

Was always going to be tough to follow up to Silent Alarm. Flux is by far the standout (I didn't realise it wasn't on the original release - without it the album is significantly weaker). Other highlights are I Still Remember and Song For Clay.

The electronic influence works well on Hunting for Witches with its chopped up news report samples and on the Prayer with its clunking tribal drum mirroring the oft animalistic nature of drinking culture and nightclubs in Britain, but there are several less convincing moments. Sometimes I get the impression that Bloc Party's reach exceeds their grasp with adopting a new musical direction, and while it's clear more care has been put into the songwriting, I'm left yearning for the straightforwardness of Silent Alarm. Oh, and the start of I Still Remember sounds like the theme-tune for a shitty 90s sitcom.

An absolute masterpiece of a concept album and it's aged so well 10 years on. Where Is Home? and Hunting for Witches are both still relevant today with their powerful references to mainstream media, whereas Song for Clay is one of the best opening tracks I have ever heard and SRXT one of the best closing tracks. Others inbetween like The Prayer, Sunday, I Still Remember, Uniform, Waiting for the 7.18 and Kreuzberg are just incredible and give great memories of relationships, partying and hanging out with your mates and the idea of escaping from the daily slog and routine whilst growing up, in particular it has been very poignant for me going through my teenage years from high school to now university. It is probably my favourite album and without a doubt one of the most underrated records of the 2000's, unfortunately it got buried on this site in a great year for music in 2007. Silent Alarm is also a favourite of mine and probably beats AWITC to many people through the power of its singles but nothing to me personally beats Bloc Party's sophomore effort. God bless you Kele.

While its predecessor is full of powerful, guitar driven indie revival, A Weekend in the City is much calmer, at times melancholy, and avidly signposts a turn in the band's records towards a more digital, experimental sound. The best tracks in this album lie within the quiet, melodic songs; ones immersed in deep meaning and address: Kreuzberg, I Still Remember, Sunday, SXRT, and possibly Song For Clay. A wonderful and woefully overlooked sophemore effort.

Just as good, but not better than Silent Alarm. Still, there are some really incredible Bloc Party strongholds here -- "Hunting for Witches" and "The Prayer" are two of BP's best efforts across all their records.

More inconsistent than their bland debut... Maybe it's better...?

Underrated, although starts better than it ends unfortunately.

An underrated gem. While I really like Silent Alarm, I can't but feel this album tops it. Song for Clay is my favorite Bloc song, and it's full of high quality songs too (The Prayer, Hunting for Witches, I Still Remember, 7:18, Flux, SRXT)

Overall I prefer it over the debut album because while Silent Alarm had excellent songs, it also had quite a bit of filler. This one is more consistently good

Unfairly labelled as a disappointing follow-up to the critically acclaimed debut, A Weekend in the city is actually close to being a flawless concept album. From coke in dirty night club toilets; playing to rooms full of bored hipsters; the desire for weekend escapism- the essence of inner-city life is the seam running through this record.

Your feedback for A Weekend In The City