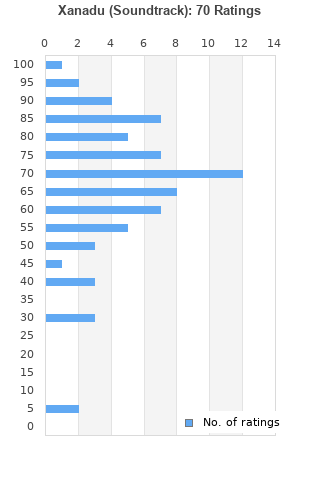 Olivia Newton-John / Electric Light Orchestra ‎– XANADU Soundtrack LP JET LX 526
Condition: Used
Time left: 3d 7h 34m 9s
Ships to: Worldwide
£9.00
Go to store
Product prices and availability are accurate as of the date indicated and are subject to change. Any price and availability information displayed on the linked website at the time of purchase will apply to the purchase of this product.  See full search results on eBay 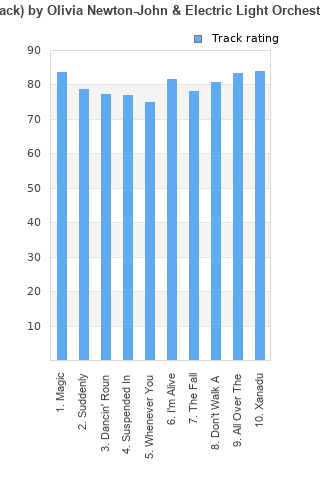 Rating metrics: Outliers can be removed when calculating a mean average to dampen the effects of ratings outside the normal distribution. This figure is provided as the trimmed mean. A high standard deviation can be legitimate, but can sometimes indicate 'gaming' is occurring. Consider a simplified example* of an item receiving ratings of 100, 50, & 0. The mean average rating would be 50. However, ratings of 55, 50 & 45 could also result in the same average. The second average might be more trusted because there is more consensus around a particular rating (a lower deviation).
(*In practice, some albums can have several thousand ratings)
This album has a Bayesian average rating of 68.9/100, a mean average of 66.2/100, and a trimmed mean (excluding outliers) of 68.2/100. The standard deviation for this album is 19.6.

What can yet say other than abysmal film. Article this week states this brought ELO down, possibly so, but all over world is right up there as one of his best radio friendly tunes. Overall the high octave backing vocals grate a bit and the keyboards sounds irritate. But three quality tunes on ELO side of the 5. ONJ side is best left alone.

They where allready old-fashioned in 1980. Today I have to smile. I like the track " The Fall"

Not unlistenable. Lackluster, middle-of-the-road pop-disco. Each of these artists has plenty of better material than rep'd in this soundtrack.

A great soundtrack to a really bad film.

Easy to bash because the movie was a coke-inducted disco nightmare (though its fun for its camp value) but the soundtrack is another story. Both ELO and Olivia were in their prime when this album was made and I personally love both halves of the album.

Classic soundtrack to a movie I love!

But yeh, the movie does suck.

Underrated. First side is shallow fun and ultimately harmless. The second side has some of ELOs best tracks on it.

The movie sucks though.

Your feedback for Xanadu (Soundtrack)