Forget And Not Slow Down (studio album) by Relient K 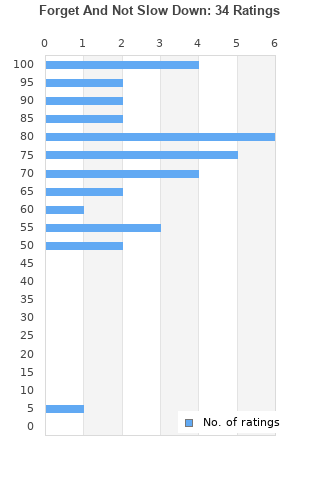 Forget And Not Slow Down is ranked as the best album by Relient K.

Listen to Forget And Not Slow Down on YouTube 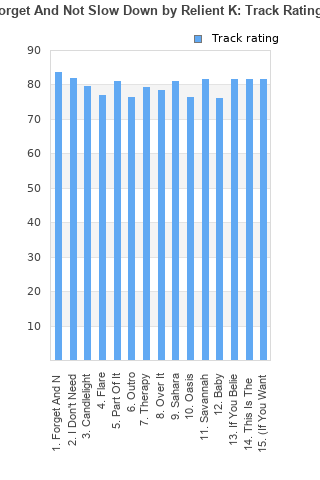 Forget And Not Slow Down rankings

Forget And Not Slow Down collection

Forget And Not Slow Down ratings

Rating metrics: Outliers can be removed when calculating a mean average to dampen the effects of ratings outside the normal distribution. This figure is provided as the trimmed mean. A high standard deviation can be legitimate, but can sometimes indicate 'gaming' is occurring. Consider a simplified example* of an item receiving ratings of 100, 50, & 0. The mean average rating would be 50. However, ratings of 55, 50 & 45 could also result in the same average. The second average might be more trusted because there is more consensus around a particular rating (a lower deviation).
(*In practice, some albums can have several thousand ratings)
This album is rated in the top 6% of all albums on BestEverAlbums.com. This album has a Bayesian average rating of 76.6/100, a mean average of 75.6/100, and a trimmed mean (excluding outliers) of 77.7/100. The standard deviation for this album is 19.0.

Forget And Not Slow Down favourites

Forget And Not Slow Down comments

After the horrible "Five Score and Seven Years Ago", Relient K came back with the best album they've ever done.

The biggest strength of this album is how it really works well as a whole. Each song is its the right place and fits perfectly in the pacing. Like people have said before, this is the perfect break-up album, where you constantly navigate through mixed emotions, from "I don't need anybody" (I Don't Need A Soul) to "She's the best I've ever had" (Candlelight) to "I should have done better" (Therapy).

The strongest track for me is de finitely "Savannah". Production-wise and lyrically, this really is a great album. Musically, while it is a big step-up from previous Relient K efforts, it's still a little bit too punk-pop for my taste, but it is still good enough to earn a 7/10 on my ratings.

This album starts out so well and then gets kind of boring. This is one of those albums that feels like it drags at places even though it's only 43 minutes. Nonetheless, there are some highlights along the way.
I'm pretty sure it was a breakup with his girlfriend that inspired him to write the album, not a broken marriage.

This is it. This is the one - the greatest album of all time. No doubt in my mind. Matt Thiessen's marriage was unfortunately falling apart, and this is the wonderful art that came from it. It is absolutely a stylistic change from the Relient K's signature pop-punky sound, though the alternative sound heard on Forget And Not Slow Down was somewhat foreshadowed on Bird and The Bee Sides. My favorite songs are If You Believe Me, Savannah, If You Want It and I Don't Need A Soul.

The arrangement of this album, musically and production-wise is masterful. This is THE penultimate break-up record, in my honest opinion. There's musical themes woven throughout, and the emotional journey of Matt's relationship and it's demise are made relatable amd easy to invest in as a listener.

Your feedback for Forget And Not Slow Down