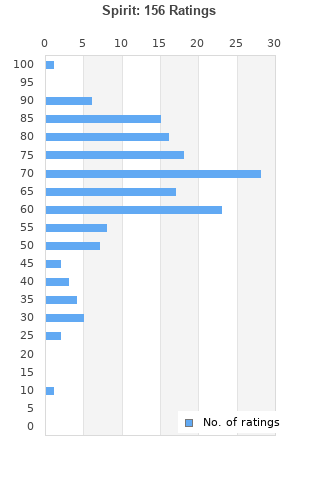 Depeche Mode - Spirit X2 12” Red Vinyl LP 2017 Brand New - Sealed MUTE France
Condition: New
Time left: 13h 23m 27s
Ships to: Worldwide
£95.00
Go to store
Product prices and availability are accurate as of the date indicated and are subject to change. Any price and availability information displayed on the linked website at the time of purchase will apply to the purchase of this product.  See full search results on eBay

Spirit is ranked 14th best out of 41 albums by Depeche Mode on BestEverAlbums.com.

The best album by Depeche Mode is Violator which is ranked number 128 in the list of all-time albums with a total rank score of 13,814. 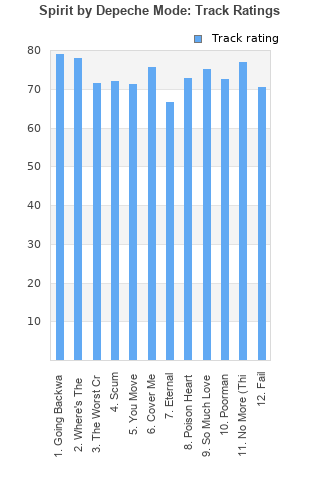 Rating metrics: Outliers can be removed when calculating a mean average to dampen the effects of ratings outside the normal distribution. This figure is provided as the trimmed mean. A high standard deviation can be legitimate, but can sometimes indicate 'gaming' is occurring. Consider a simplified example* of an item receiving ratings of 100, 50, & 0. The mean average rating would be 50. However, ratings of 55, 50 & 45 could also result in the same average. The second average might be more trusted because there is more consensus around a particular rating (a lower deviation).
(*In practice, some albums can have several thousand ratings)
This album has a Bayesian average rating of 67.2/100, a mean average of 66.3/100, and a trimmed mean (excluding outliers) of 66.8/100. The standard deviation for this album is 16.0.

Spirit is a lopsided work. Some quality instrumentals are mixed with strong handed political commentary or vice versa. There are however occasional successes such as cover me.

the construction time again of 2k17. good for an band in their thirties. not their best work, either musically or lyrically, but pretty decent for a band growing old.

Ouch - harsh ratings. I think someone else said it already, but I agree. This is easily on par with a lot of music out of 2017, but I think people expect something amazing from an artist like Depeche Mode.

I'm into the heavy lyrics - poignant for our times. For me the music is good, but the balls to the wall aspect of this album really is the lyrics in my opinion. Musically nothing really got me - nothing bad, just nothing like WOW.

Another, what I would say competent album from Depeche Mode, although, again, unspectacular. As with most DM albums it starts to run out of steam towards the end. 10 tracks instead of 12 would have been better. The other problem with latter day Depeche Mode is the lack of that killer song. They had so many great singles in the eighties and nineties but since the turn of the century those songs seemed to have disappeared. Still, Spirit, is good, and like, Delta machine, is a huge improvement on, Sounds of the universe, but let's be honest here, Depeche Mode are past their best. They may release these sort of, 'not bad but not as good as they used to be' albums like U2 do and REM did towards the end of their career but you know in your heart of hearts that the glory days are well and truly over. The initial 'positive' reaction as always, but it will soon be forgotten. I still like this record but we're never going to get a, Personal Jesus, again.

No one could call me the biggest fan of Depeche Mode, so perhaps I'm being a bit a philistein here. However, this sounded a little like the rehashing of old ideas. Sure, in the context of 2017, this may be one of the best albums of the year so far, but its bang average when compared to anything else.

I went in this expecting to hate it, but I quite liked it. True, it lacks subtlety and is too heavy-handed lyrically for my liking, but the music is great. 10/10 would listen again.

I listened to this without expecting too much. Never been a very big fan of Depeche Mode but I decided to give this a try.

This album was much better than I imagined it to be. It's weak at certain points, but overall it's very enjoyable. The last songs on the album leave you wishing it were longer.

Best songs: Going Backwards, Where's the Revolution, No More (This Is the Last Time)

Do we really need another bunch of rich pop stars lecturing us about the worlds ills? Probably not and the critics are going to have a field day with this latest sermon from the pulpit on how the world is going to hell in a go-kart. But hey, they do it really well and it's their best since Playing The Angel.

Your feedback for Spirit