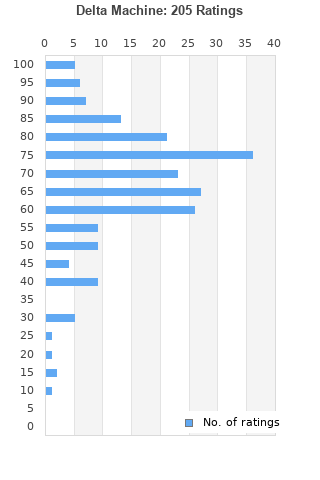 Delta Machine is ranked 12th best out of 39 albums by Depeche Mode on BestEverAlbums.com.

The best album by Depeche Mode is Violator which is ranked number 128 in the list of all-time albums with a total rank score of 13,689. 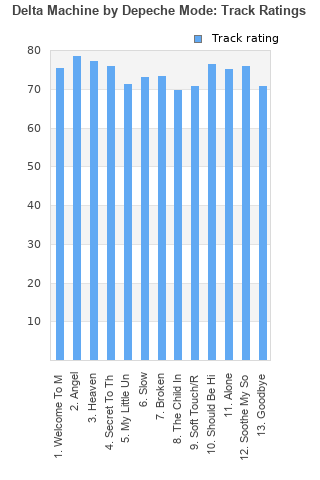 Outliers can be removed when calculating a mean average to dampen the effects of ratings outside the normal distribution. This figure is provided as the trimmed mean. A high standard deviation can be legitimate, but can sometimes indicate 'gaming' is occurring. Consider a simplified example* of an item receiving ratings of 100, 50, & 0. The mean average rating would be 50. However, ratings of 55, 50 & 45 could also result in the same average. The second average might be more trusted because there is more consensus around a particular rating (a lower deviation).
(*In practice, some albums can have several thousand ratings)
This album has a mean average rating of 68.0/100. The trimmed mean (excluding outliers) is 68.4/100. The standard deviation for this album is 17.0.

The best Depeche Mode album since, ultra. Delta machine, has a slight blues feel to some of the tracks, proving the band are still looking for new ways to express themselves. Having said that, I wouldn't say there's any out and out classics here, but it's difficult for a band after 30 years to still come up with iconic tunes. Delta machine, is not amazing, but proves there's life in the old dogs yet.

Best tracks: Should Be Higher, Heaven, Secret to the End,
Welcome to My World.

Pretty good album, a bit inconsistent, but some great tracks!

Not a bad album by any means, and actually has some of Depeche's post-Alan Wilder songs, but the main problem here is quality control. If we widdled the 17 tracks down to 11 or 12, I think this would be a solid album and it wouldn't have as much of a "going through the motions" feel do it. Too many people are harsh on later Depeche because they haven't released anything on the level of Violator or Music For The Masses in eons, but to be honest a few guys in their early 50s who are now seen as legends who know they're going to go on another round of sellout concerts every 4 years aren't expected to have the same drive and hunger as a much younger band in their creative and commercial prime. If you listen to it as the followup to Sounds Of The Universe and not try to compare it to their 1984-1993 material when they were in their glory, its better than you think it is. As a whole they continue on their bluesy/rock path from the last two albums, but there are more traces here of old-school Mode than in anything else they've done in the past ten years.

It’s boring. It’s the same old stuff Depeche Mode has been releasing for years. It’s unfortunate to think that a band like Depeche Mode who was so different and so good in the mid-90s releases an album like this that has nothing different or interesting to it. The music isn’t bad, not at all. But it’s definitely not good. It’s just boring, it’s slow, it’s un-engaging. There are songs here and there that are decent, but generally, it's fairly uninteresting.

If Depeche Mode can step up their game and release another great album, I’ll be excited, but as of now, it seems like they’re just stuck in a rut and they’re not getting out of it anytime soon.

This album draws you in it is very atmospheric very ethereal with great sounds. These guys are still going strong.

Depeche Mode went downhill post-Violator, trying too hard to become dark, gothic, and electronic crammed into one. This is a perfect example of what Depeche Mode have become. I want 80s synth-pop DM back!

Sadly it's not a good record.

Best track: Welcome To This World

Your feedback for Delta Machine