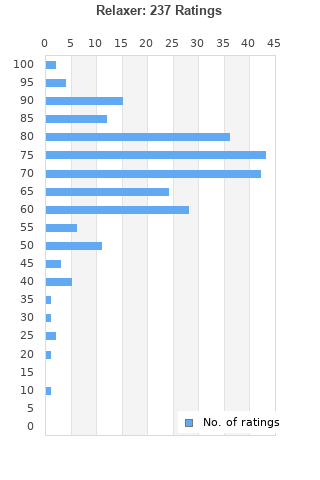 ALT-J CD - RELAXER (2017) - NEW UNOPENED - ATLANTIC
Condition: Brand New
Time left: 2d 7h 57m 24s
Ships to: Worldwide
$17.99
Go to store
Product prices and availability are accurate as of the date indicated and are subject to change. Any price and availability information displayed on the linked website at the time of purchase will apply to the purchase of this product.  See full search results on eBay

Relaxer is ranked 3rd best out of 6 albums by alt-J on BestEverAlbums.com.

The best album by alt-J is An Awesome Wave which is ranked number 219 in the list of all-time albums with a total rank score of 8,783. 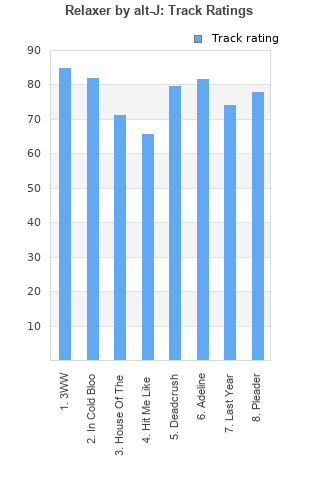 Rating metrics: Outliers can be removed when calculating a mean average to dampen the effects of ratings outside the normal distribution. This figure is provided as the trimmed mean. A high standard deviation can be legitimate, but can sometimes indicate 'gaming' is occurring. Consider a simplified example* of an item receiving ratings of 100, 50, & 0. The mean average rating would be 50. However, ratings of 55, 50 & 45 could also result in the same average. The second average might be more trusted because there is more consensus around a particular rating (a lower deviation).
(*In practice, some albums can have several thousand ratings)
This album has a Bayesian average rating of 71.0/100, a mean average of 70.2/100, and a trimmed mean (excluding outliers) of 70.9/100. The standard deviation for this album is 13.7.

There’s a lot on this album that really shouldn’t work - conflicting musical ideas, clumsy lyrics - but everything is so densely layered that it’s hard to escape Alt-J’s world. If This Is All Yours called for extra close attention and sensitivity, Relaxer’s message is, quite simply, to relax.

When In Cold Blood and 3WW came out I was so exited about this. This could have easily been better than this is all yours or Awesome Wave. But they totally killed it with Hit me Like That Snare and one of the worst cover songs I've ever heard (Rising Sun)

Pleader is an incredible song. Have another listen.

This is album is the definition of a mixed bag: it has some of the best stuff alt-J has ever put out (Adeline, Deadcrush, etc), two "meh" tracks (Last Year and Pleader) and two of the worst songs they've ever made (House of the Rising Sun and Hit Me Like That Snare). I think the good of this album outweights the bad, but barely so.

Though the songs are not bad, I miss the artistic way of Alt-J's album compositions. Where is the intro? Where are the interludes? This is not really an album to me, it's just a collection of songs. Some good, some ok, some bad. I also don't really get the 'cover'

First Alt-J album which seems to be the most cohesive. I felt like the other albums were a bit all over the place - a good thing in of itself at times, but for me was a bit of a turn off somehow.

Their complete recreation of house of the rising sun was an interesting endeavor. Pretty cool to make something like that your own on a totally new song (it's not a cover).

Tracks 6 and 7 were slightly weak, but really dig the rest of the album.

Not nearly as disappoining as I first thought. 3WW is supposedly their personal favourite, but mine is Deadcrush. Adeline and other tracks also make this very likable alt j... although, also, wildly inconsistent and unsuccessful in parts.

Your feedback for Relaxer