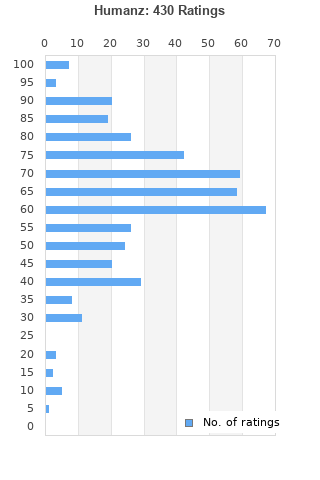 Humanz is ranked 5th best out of 12 albums by Gorillaz on BestEverAlbums.com.

The best album by Gorillaz is Demon Days which is ranked number 128 in the list of all-time albums with a total rank score of 12,999. 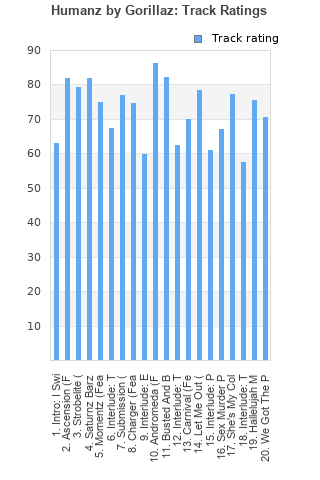 #
Track
Rating/Comments
1.
Intro: I Switched My Robot Off
Rating: 63 (67 votes)Comments:

Rating metrics: Outliers can be removed when calculating a mean average to dampen the effects of ratings outside the normal distribution. This figure is provided as the trimmed mean. A high standard deviation can be legitimate, but can sometimes indicate 'gaming' is occurring. Consider a simplified example* of an item receiving ratings of 100, 50, & 0. The mean average rating would be 50. However, ratings of 55, 50 & 45 could also result in the same average. The second average might be more trusted because there is more consensus around a particular rating (a lower deviation).
(*In practice, some albums can have several thousand ratings)
This album has a Bayesian average rating of 63.6/100, a mean average of 62.6/100, and a trimmed mean (excluding outliers) of 63.4/100. The standard deviation for this album is 17.1.

Way too bloated, ironically one of the songs on the deluxe version (the Apprentice) is probably the best on the album. First half much stronger than the second. Hallelujah Money is just terrible. And too many pointless interludes. Not a fan of this as an album but its rating is salvaged by some a few good tracks.

The first half is solid with some enjoyable songs. Side two has an abundance of Gorillaz's most forgettable songs

Damon Albarn has proven he knows how to collaborate, look at Demon Days and Plastic Beach. But on this effort, the collabs are a bit average at times. Still a few bangers on here, overall better than expected. Looking forward to the Now Now.

unfortunately the streak of great albums stopped with this one. Lets hope the next one is at least better than this one.

I think this album is underrated, it actually is quite enjoyable. 7.6/10.

One of the worst album of this year. Can't believe is so ugly.

Your feedback for Humanz