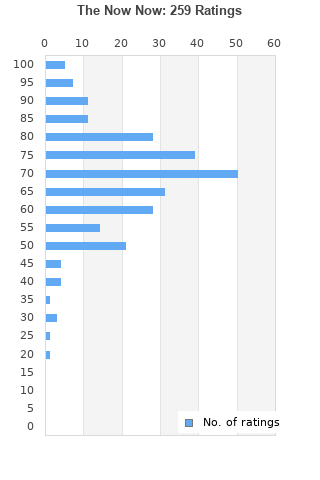 The Now Now is ranked 6th best out of 12 albums by Gorillaz on BestEverAlbums.com.

The best album by Gorillaz is Demon Days which is ranked number 128 in the list of all-time albums with a total rank score of 12,999. 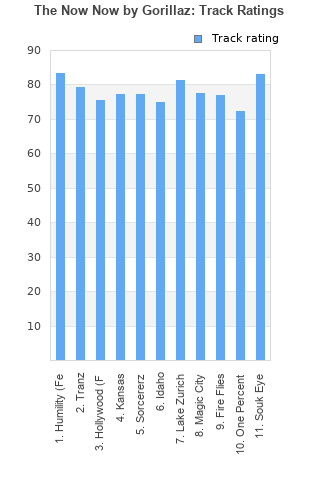 Rating metrics: Outliers can be removed when calculating a mean average to dampen the effects of ratings outside the normal distribution. This figure is provided as the trimmed mean. A high standard deviation can be legitimate, but can sometimes indicate 'gaming' is occurring. Consider a simplified example* of an item receiving ratings of 100, 50, & 0. The mean average rating would be 50. However, ratings of 55, 50 & 45 could also result in the same average. The second average might be more trusted because there is more consensus around a particular rating (a lower deviation).
(*In practice, some albums can have several thousand ratings)
This album has a Bayesian average rating of 69.2/100, a mean average of 68.7/100, and a trimmed mean (excluding outliers) of 69.1/100. The standard deviation for this album is 14.0.

Nowhere near the quality of Gorillaz' first three albums. But there are still some highlights and it certainly isn't terrible. Souk Eye is my favourite track on the album.

This is by far my favorite Gorillaz album, and one of my favorite albums of all time. This isn’t the best in quality, as the main three, S/T, Demon Days, and Plastic Beach are better in quality, but I do earnestly believe that this album beats Humanz. Each song in this album has something to say, and work with each other quite well. Souk Eye is the stand out for me, as it is one of my favorite songs of all time, due to its incredible build up while maintaining a melancholic mood. Not to mention, the production in this album is phenomenal.

I dunno, honestly I really like it. It's more chill and trippy then their other stuff which is cool. It reminds me of some of his Blur stuff and Gorillaz mixed up. I appreciate how psychedelic it turned out to be.

I came into this album without much expectations. The singles released beforehand didn't really grab me. Upon my first listen, I thought that it was okay. It didn't feel grand and ambitious like the main projects Gorillaz had put out. It definitely feels like a side project, sort of like The Fall. But over time, I really started feeling the hooks and melodies, and appreciated many of the choices made with songwriting. I found the buildup on Souk Eye to be refreshing, as interesting song structure was a bit lacking on Humanz. I also like the consistency of the album's tone and sound. Still, I can't deny that there are a few dull moments here and there. And since it is more of a side project, it has less depth than their main works. Despite this, I have come to enjoy The Now Now. It feels like what I wanted The Fall to be. It's one of the most mellow and moody Gorillaz albums, but feels like one of the most personal as well. The Now Now has really grown on me. In contrast, I enjoyed Humanz less and less over time. As of now, I honestly think that I like The Now Now more than Humanz, and I find myself returning to this album far more often than Humanz. I was underwhelmed by Humanz, and after its release I felt a little worried for the future of Gorillaz. But now, I feel like this album restored some of my hope for the band's future.

It grew on me

I feel like the best part of this album is the production on the whole thing. It genuenly saves this album from being bad. Other than that, this album is extremely underwhelming and just, exists. There's nothing that's down right offensive, but it's just lacking so much of the quality of Gorillaz's earlier stuff. Even Humanz had better song. But to give this album credit, it's all mediocre, and I mean all of it. It's the most 5/10 album I've ever listened to. The opener, 'Humility' is pretty good, and the closure is pretty good, other than that, it all feels lack luster. I really hope Gorillaz can pull something together around the quality of Demon Days or Plastic Beach, or even their debut in the future.

Underwhelming. I mean it's all quite cohesive and comes together quite nicely, but there aren't any songs to get really excited about, and all their previous LPs had at least a few of those. I like the electropop and synth funk influences and it definitely is a good piece of work, but similarly to the wildly uneven "Humanz", it's just not great.

Weird. I never thought I'd call a Gorillaz album boring.

I was kinda underwhelmed on the first listen. It's short and straithforward without many guest which makes it unlike any other Gorillaz album.
Still on repeated listens it grew and me and I like it more than Humanz (I was one of the people who actually did like Humanz). You can see that it avoids exactly the things Humanz was critisized for.

I like it way more than Humanz. Its more concise like they cut down all the filler songs that made humanz bad.

This is just my reaction after the first listen, i don't know if it will hold up, but I could barely finish Humanz when i first heard it, so its definitely a big step up cuz Im actually enjoying this alot. (Also it made me miss Blur. Damon sounds like he did in Blur in some songs.)

Your feedback for The Now Now