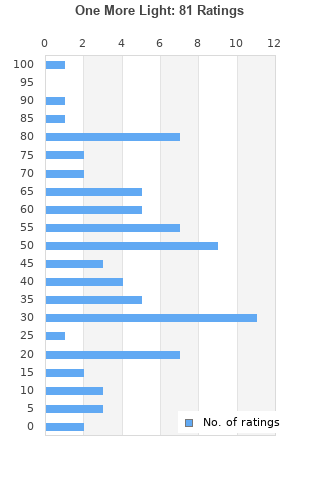 One More Light is ranked 8th best out of 13 albums by Linkin Park on BestEverAlbums.com.

The best album by Linkin Park is Hybrid Theory which is ranked number 635 in the list of all-time albums with a total rank score of 2,886. 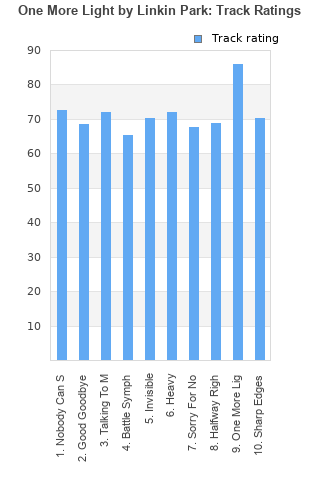 Outliers can be removed when calculating a mean average to dampen the effects of ratings outside the normal distribution. This figure is provided as the trimmed mean. A high standard deviation can be legitimate, but can sometimes indicate 'gaming' is occurring. Consider a simplified example* of an item receiving ratings of 100, 50, & 0. The mean average rating would be 50. However, ratings of 55, 50 & 45 could also result in the same average. The second average might be more trusted because there is more consensus around a particular rating (a lower deviation).
(*In practice, some albums can have several thousand ratings)
This album has a mean average rating of 43.0/100. The trimmed mean (excluding outliers) is 43.1/100. The standard deviation for this album is 23.0.

sad ending
never really liked LP that much, but i feel respect for this tragic story of two successful albums and the long decadence ending with Chester commiting suicide
RIP LP

I already said I was afraid to listen to this because I had a feeling it will be terrible. After Chester died I felt obligated to give it a listen.
I must first say that I'm someone who enjoys their later work. A Thousand Suns and The Hunting Party are album I really like and often revisit.
But this album is just so bad that it's easily their worst ever. Everything is wrong on so many levels, and the songs are lazy and uninspired.

The only redeeming quality of this record is, ironically, Chester's voice which lost none of it's beauty. The only decent songs are the title track and the opener Nobody Can Save which are more minimalistic and sparse so Chester's voice really shines.

Overall a bad way to go out, thankfully I can still enjoy their other records (this one and Living Things are the ones I won't revisit often)

Personally I don't mind when band's try to do something different or out of their wheelhouse. They tried a pure pop album and I think it could have been good. The problem is, it was lazy, cliched and just bad. They could have done their own twist on the pop genre but instead they created one of the worst albums I have heard in a long time.

I'm really scared to listen to this. I mean I even liked their last album, but that single is so terrible that I don't really wanna hear the rest.

Linkin Park have officially made one of the worst albums in music history. A great "FUCK YOU" to older fans.

Your feedback for One More Light