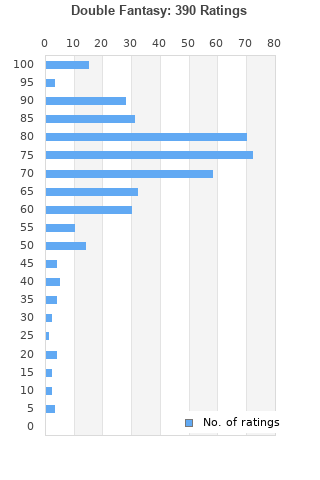 Double Fantasy is ranked as the best album by John Lennon & Yoko Ono. 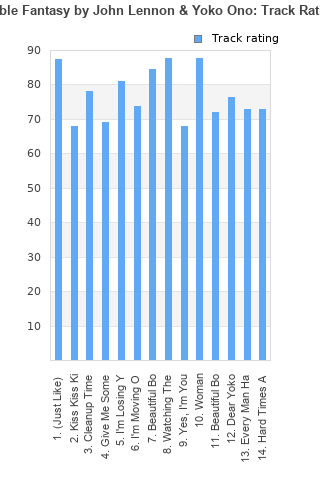 Rating metrics: Outliers can be removed when calculating a mean average to dampen the effects of ratings outside the normal distribution. This figure is provided as the trimmed mean. A high standard deviation can be legitimate, but can sometimes indicate 'gaming' is occurring. Consider a simplified example* of an item receiving ratings of 100, 50, & 0. The mean average rating would be 50. However, ratings of 55, 50 & 45 could also result in the same average. The second average might be more trusted because there is more consensus around a particular rating (a lower deviation).
(*In practice, some albums can have several thousand ratings)
This album has a Bayesian average rating of 73.3/100, a mean average of 72.0/100, and a trimmed mean (excluding outliers) of 73.3/100. The standard deviation for this album is 15.8.

I like it but not as much as I was hoping, I was hoping to be more pro yoko and though in concept I admire the raw singing approach in practice it can sometimes be not that enjoyable, I will say the sound of her voice is nice, it’s just her having no control that isn’t. That said I do admire some of the out there moments, like all of kiss kiss kiss I guess though I do gotta question why this song full of sex noises is on an album with tributes to their son, not really fair on the kid I thought, gonna be an uncomfortable listen if he explores past the tracks for him. Of course though the best moments are from Lennon, Starting Over being my favourite. An odd, divisive album that I could see surprising a lot of people.

What an incredibly strange album. It has some pieces that have merits, but the sum of its parts is undeniably inferior to the end result. It was a brave and interesting experiment, though ultimately it says more about how infatuated John was with Yoko than it speaks of any kind of vision for this album. Unless that was the vision. And it may have been...

I actually think some of Yoko's songs are pretty interesting, but if I was an average music listener buying this record in 1980 I would have been extremely put off by her songs, which is probably one of the reasons why she is villainized so much among Beatles/Lennon fans. But here's what makes this album so unique. When else has an artist of such an exalted status made such an anti-pop, hodgepodge of an album. I have an extremely hard time believing that anyone listened to this and said "Good! Done!"

Unfortunately, some of John's songs are the weakest in my opinion, which isn't to say they are poorly *written*--some of them are quite beautifully done elsewhere--but the production style has aged extremely poorly. So even most of what are considered the highlights of this album really don't even work that well for me. At the end of the day what's remarkable about this album is how far it strays from the norm for a "mainstream" release, and how much of an unashamed critical failure it was allowed to be because "all you need is love".

Bought it when it came out. I tried to like it cause it's John. But in the end it's only ok and none of the songs by Lennon are up to his finest compositions. Then there's Yoko. Yoko can't sing. Yoko is not a songwriter. However, I will give her an A+ for audacity.

The John songs on this album make me so happy. I see it as the rebirth of the great John Lennon, yet a subliminal goodbye. Not including the Yoko songs, this is probably johns best album. It’s a shame there are only 7 songs. Watching the Wheels and I’m Losing You are my favorites on the album but all of the John songs are great.

I never knew Yoko made some decent tracks.

There's some great Lennon tracks on here some of his finest work although this doesn't hold up as an album for me, best tracks are on several compilation albums.

This has to be my favorite John album, actually, I like It more than some classic Beatles like "Revolver" or "Rubber Soul", but, the fact is that this album has anything to do with the Beatles, diferently of his Plastic Ono debut, John, on this one, was long gone of his days at the Beatles. Returning from an absent from the music industry, John now was a family men, a facet of John in his lyrics and style, show up in this album, like we never seen before. "Just Like Starting Over", "Beatiful boy (Darling boy)", "Woman" and "Watching the Wheels" all show a diferent John, full with emotion, but at the same time calm, and loving. All of this four songs reaches the maximum music rating that can be, for the only merit of being full of emotion, and sincerity. But the critics on the album, in other hand, are about the other songs, especially the Yoko ones. Well, see this is an album made by a couple, It wouldn't make sense If only one of them appeared, the chemistry of the album comes from the love between John and Yoko, without it, songs like the ones I mentioned wouldn't even exist in the first place, and the actual Yoko songs aren't half as bad as some people say. In retrospective, this is a beatiful album, full with hope for the future, that seemed so dark at the time.

A difficult album to rate. Have to be totally honest and say I never listen to the songs by Yoko. The songs by John are average to very good. The album is of course overshadowed for many of us around at the time, by the events that followed its release. Decent without being brilliant.

Liking all of John's contributions however someone Yoko's are a bit distasteful. Glad to hear a more upbeat Lennon album though compared to his earlier solo work.

Your feedback for Double Fantasy